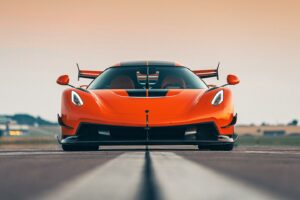 Watch the full walkaround with Mr Koenigsegg himself

Koenigsegg isn’t a name that pops up all that often, but when it does, it’s usually worth paying attention to. This is one of those times, as the brand has unveiled its brand-new, production-ready Jesko supercar. If you’ve already seen the pictures floating about on the internet this week, then it gets better. Mr Koenigsegg himself – the name’s Christian von Koenigsegg – has now given us a beautiful walk-around of the Jesko, inside and out, in all its glory.

The Jesko – pronounced ‘Yesko’ – is being shown for the first time since its unveiling at the Geneva Motor Show in 2019. There’s now the Jesko Absolut, which is the high-speed version, and Jesko Attack, designed to be more track focused still.

The first thing you’ll notice is the paintwork. That Tang Orange Pearl harks back to the Koenigsegg CCR from back in 2004. Next you’ll see the carbon fibre wheels, carbon fibre front splitter, and a front air scoop that is housed entirely in the front luggage compartment. So there’s nowhere to store the roof. Great for this week’s British weather, eh? Under that bonnet, though, is a twin-turbocharged V8 engine producing 1,280hp on regular roadside petrol, but claimed to kick out up to 1,600hp when run on E85 ethanol. That fuel also suggests a top speed of over 300mph – maybe.

In its prototyping phase, Koenigsegg says that the Jesko has proven to “deliver ultimate responsiveness and driving sensation.” Triplex suspension is featured on the front, including a hydraulic pretensioner to add extra stiffness, needed due to the sheer amount of downforce the Jesko provides (around 1,000kg on paper).

The real uniqueness of the Jesko is Koenigsegg’s patented Light Speed Transmission; one of the fastest, slickest dual-clutch technologies seen on the market. It has nine forward gears with seven multidisc clutches that results in gear changes of just 20 milliseconds. Which is pretty quick.

Inside, the Jesko is the most spacious car Koenigsegg has ever produced – obviously you won’t be getting a bike in the boot, but there’s more legroom for the lankier of drivers. There’s a racing-inspired SmartCluster instrument panel, which turns with the wheel like on a F1 car’s steering wheel, and carbon fibre everything. The weird swivelly doors have been reinvented, so they swivel even more than before, but those industry-adored water-bottle-sized door bins have a lid so everything doesn’t fall out when it rotates 90′. There’s even two cupholders and USB chargers, so no complaints about this being a non-practical supercar. Of course, it’s non-affordable, too – the Jesko is thought to start at £2.3m before taxes.