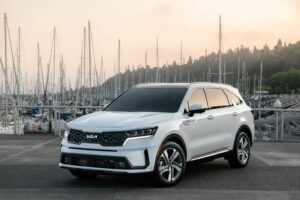 The Kia Sorento family is growing by one this fall to include a plug-in hybrid, as Kia works to implement its Plan S electrification strategy. The Sorento PHEV will share its looks and its platform with the gas-powered Sorento, which got a bold-looking redesign for 2021. The Sorento plug-in looks to be closely related to the Hyundai Santa Fe plug-in hybrid, which is expected to go on sale this summer.

The Sorento PHEV will be powered by an electric motor and a turbocharged 1.6-liter gasoline engine, which will combine to make 261 hp. The Sorento plug-in will use a six-speed automatic transmission with standard paddle shifters. The EPA hasn’t made official estimates on the range or fuel economy of the Sorento PHEV yet, but Kia says the new plug-in will get 32 miles of electric driving range from its 13.8-kWh battery. Kia doesn’t share usable battery capacity, our preferred metric, but we expect it’ll track with the Santa Fe plug-in’s 12.4 kWh of usable battery space. With the help of the gas engine, Kia estimates the Sorento will have 460 miles of range.

Outside, the Sorento PHEV will be distinguishable from the gas Sorento by the extra rear port for its plug and the model-specific rear badging. The PHEV will also come standard with 19-inch wheels. Inside, there are second-row captain’s chairs and a third-row bench. Synthetic leather upholstery is standard, but real leather seats are available.

The plug-in is scheduled to hit dealer showrooms this fall. Kia hasn’t announced pricing for the new car yet, but our money says it’ll start in the ballpark of $40,000. Based on the size of its battery, the Sorento plug-in buyers will be eligible for a $6587 federal tax credit—about $1000 less than the maximum federal tax credit—but whether they’ll qualify to take advantage of the full amount will depend on individual tax liabilities.