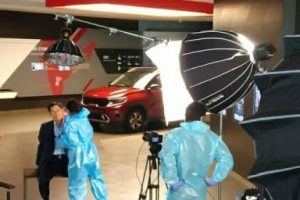 The Kia Sonet has been partially revealed in an image that has been shared on social media. The image appears to have been captured during an ad shoot.

The Sonet gets Kia’s signature tiger nose grille. The car seen in this image appears to be the GT Line trim. It has a dual-tone exterior with silver roof rails, black ORVMs and dual-tone alloy wheels.

Reports suggest that the Sonet GT Line could come in GTX and GTX Plus variants. The GT Line will be offered with the 1.0-litre turbo petrol engine that will be paired with a 7-speed dual-clutch automatic transmission.

In addition to the 1.0-litre turbo-petrol engine, the Sonet will get a 1.2-litre naturally aspirated petrol engine and a 1.5-litre diesel engine. Besides the dual-clutch automatic, the sub-4 meter SUV will get Kia’s 6-speed iMT which has an automated clutch.

Thanks to the Team-BHP fan (he prefers to remain anonymous) who sent this image in. Heartfelt gratitude for sharing it with other enthusiasts via this page!