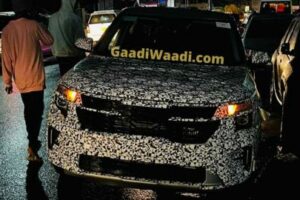 The updated Seltos is likely to be offered with Advanced Driver Assistance Systems (ADAS).

The Kia Seltos facelift has been spotted testing in India once again. The latest spy images partially reveal the SUV’s new front fascia.

The Seltos facelift will get a redesigned front grille and split headlamps. The front bumper has also been tweaked and now gets a wide air dam with vertical vents on either side. Note that the test mule seen in these images has projector headlamps and halogen tail lights, which suggest that it could be a lower variant.

Mechanically, the Seltos facelift is likely to be similar to the outgoing version. It will continue to use the same 1.5-litre petrol, 1.4-litre turbo-petrol and 1.5-litre diesel engines.

The updated Seltos is likely to be offered with Advanced Driver Assistance Systems (ADAS) and is expected to be launched later this year.