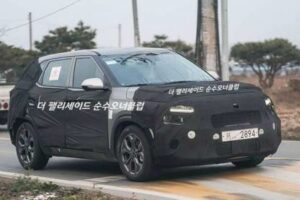 The updated Seltos appears to have L-shaped tail lamps similar to those on the Kia Carens.

Test mules of the Kia Seltos facelift have been spotted in South Korea. The SUV is expected to get cosmetic updates at the front and rear, along with a few changes to the interior as well.

The spy images suggest that the Seltos facelift is likely to get a redesigned front fascia. At the rear, the car appears to have L-shaped tail lamp clusters similar to those on the Kia Carens. The interior is expected to be largely the same albeit with a few upgrades.

The updated Seltos is expected to be offered with the same engines as the outgoing model. These include 1.5-litre naturally aspirated petrol, 1.4-litre turbo-petrol and 1.5-litre diesel engines. The 6-speed manual, 6-speed IVT, 6-speed automatic and 7-speed dual-clutch automatic transmissions are likely to be retained as well.