Kevin Hart’s Muscle Car Crew: A Journey into the World of Classic Cars 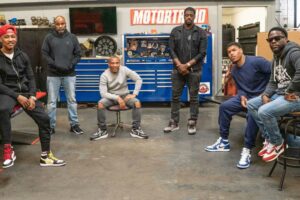 “The art of building a car knows no color,” said actor/comedian Kevin Hart in an exclusive interview with HOT ROD in anticipation of the new show Kevin Hart’s Muscle Car Crew. His words are true, and that’s a fact I’ve witnessed over my nearly two decades in the industry.

Cars bring people of all walks of life together. The shared passion among enthusiasts breaks down perceived differences in age, demographics, and social status. No matter what you look like or where you came from, you can always recognize a cool car and share a conversation with a stranger over it. As a colleague and friend for many years loves to say, “If the world were run by car guys (and gals), it would be a much better place.”

Related: Get ready for full-throttle fun with Kevin Hart’s Muscle Car Crew, streaming July 2 only on the MotorTrend App! Sign up for a free trial today!

Kevin Hart is a true enthusiast with an impressive collection of vintage and modern cars, most from the muscle car era, but a few exotics and European sports cars are thrown in for good measure. Even better, he wants his cars to be functional as drivers and has taken to attending car shows in Southern California—most notably, the Quarantine Cruise in Huntington Beach—and wanted to bring his core group of friends along with him, so about 18 months ago, he bought each of his five closest friends a car that seemed to be reflective of their personalities. That way, they could attend shows together as a group they’ve dubbed the Plastic Cup Boyz. Why plastic cup? Kevin says he associates the ubiquitous red plastic cup with having a great time. “It came from touring. Backstage at shows, you’re usually drinking from a plastic cup. It’s the same with family barbecues and parties.”

With this spirit of seeking a good time, Kevin and his crew began attending local car shows, and though they weren’t all “car guys” at the start, they each got hooked. We all know how it goes from there. You have a cool car that you take to your local show, and as you meet more people and swap stories, the bench racing sessions ensue. Suddenly, you want more power, a better stance, wider tires, and bigger brakes. The parts catalogs come out, plans are formed, and money changes hands, and that’s where the newbie can fall into a trap. What are the best modifications to do to an already nice car? What parts should you avoid? What offers best bang-for-the-buck? Who should do the work? The guys had the wherewithal to recognize they were potentially straying off path and paused to regroup. Since all of them are “in the biz” as the expression goes, they drew upon their writing and producing talents and pitched a show that documented their journey into the world of performance cars. Kevin enthusiastically approved, and MotorTrend signed on.

To help steer the ship, Lucky Costa, intrepid co-host of HOT ROD Garage, was recruited as the show’s mechanic and car advisor. Drawing on decades of experience as a mobile technician and electrical system troubleshooter, Lucky suggested real-world performance upgrades for each car, then built the cars at his shop. Meanwhile, the Plastic Cup Boyz dove headfirst into the performance world by participating in a one-day driving class at the Radford Racing School in Phoenix, then attended the Barrett-Jackson auction the next day. They also made a trip to Irwindale, California, for some passes on the 1/8-mile dragstrip and a ride-along in a Formula D drift car.

The show chronicles the journey of the Plastic Cup Boyz as they immersed themselves into classic car culture. As Harry explained to us, “When we first went to cars and coffee, we experienced all the different cars and cultures that were there—lowriders, sports cars, prewar—and each group had people who were experts in their range of cars. People would come up to Kev and ask questions like, ‘What transmission are you running? Is that a 4L80?’ He had no idea what they were saying. He couldn’t speak the jargon or the lingo. We thought it would be funny to have a show about guys who aren’t afraid to admit that we don’t know much about cars. We don’t know, but we’re willing to learn. We have this passion; we love classic cars.”

You’ve got to respect that attitude; not many people are willing to admit a lack of knowledge, much less make it as public as these guys are. Harry continued, “All the people we’ve met have been so open to us and willing to share information. You just bond over cars. We’re willing to learn, and we want you guys to learn with us. That was the genesis of the show.”

“[The show] is based on friendship. Cars bring people together.” — Kevin Hart

In addition to learning the mechanical jargon from Lucky, the guys were treated to a one-day driving clinic at the Radford Racing School, an experience Joey recalled with some chagrin. The day included sessions on track as well as the slalom course and skidpad. Spank told us he suffered a crippling case of motion sickness early that morning that nearly took him out for the rest of the day.

“Spank’s a wuss,” said Joey. “He probably told you it was something he ate!” In a more serious tone, he added, “The racetrack was intimidating. My left leg was shaking like a drummer, and I kept thinking, ‘I hope I’m doing this well.’ I learned a lot, though. Driving techniques aren’t always intuitive, but the experience helped me with everyday street driving.”

“I had to get out of the car,” Spank exclaimed. “They gave me a pill—Dramamine, I think. It helped, but it took a while,” he said of his churning stomach. The crew went to Barrett-Jackson the next day, and Spank said he had a great time looking at all the cars for sale. “I wanted to buy something, but they were all more than I wanted to spend,” he added.

At Irwindale, California, John and Spank raced each other on the track’s 1/8-mile dragstrip, where the LS3-powered Camaro spanked (pardon the pun) the big-block Chevelle. If the guys hit the track again, Spank’s new 525-horsepower crate engine will certainly fare better but will likely still get served by John’s newly supercharged Camaro. At the same time, Joey was harangued into a ride along with Kelsey Rowling in her Formula D drift car. “No one volunteered. Spank said he was too tall to fit in the car,” Joey says. About the ride, he continued, “It was terrifying. We kept getting closer and closer to the wall, and I was thinking, ‘Not like this. I don’t want to go out like this. If she slows enough, I’m going to get out of this car!'” He survived, of course, but ride-alongs in drift cars can make one pause to consider whether their will and life insurance policy are up to date. Other less intimidating field trips included a stop at the Petersen Automotive Museum for a behind-the-scenes tour of the collection, an air-cooled Volkswagen show at Los Angeles’ Dockweiler Beach, and a visit with Mister Cartoon, an Los Angeles-based tattoo artist who took the guys to a lowrider cruise.

Kevin Hart’s Muscle Car Crew will debut July 2 on the MotorTrend App and will run a total of eight episodes—sign up today for a free trial! The overarching theme is of learning from and participating more fully in the classic car culture. “It’s based on friendship,” Kevin says. “Cars bring people together.”

Trivia: John calls the car Elmo. “Every time I hit the gas; I giggle like Tickle Me Elmo.”

Trivia: When he first got it, the car was very unreliable. There was a draw on the battery, it overheated, often wouldn’t start, and left Boss stranded on the freeway.

Trivia: Spank is Kevin’s oldest friend of the group. They grew up together in Philadelphia.

Trivia: “I only took the car on the freeway once, and it was scary,” Joey says. The alignment was off, the suspension was worn out, and the engine was really tired.

Trivia: Harry is a U.S. Navy veteran. His car was at a couple different shops before taking it to Bent Custom & Performance in Chatsworth, California, where it was completely rebuilt. Harry used this experience to help develop the concept for the show.

Trivia: This is one of more than 20 classic and exotic cars Kevin owns. During production of the show, he won a 1959 Corvette at Barrett-Jackson with a bid of $825,000. Earlier this year, he bought an all carbon-fiber 1970 Charger (pictured, above) built by SpeedKore with Dodge’s 1,000-horsepower Hellephant crate engine.