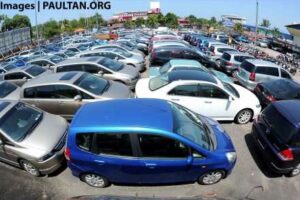 The road transport department (JPJ) has raked in RM5.9 million from auctions of seized vehicles so far this year. The sum was raised from the auction of 636 vehicles nationwide, Bernama reported.

According to JPJ deputy director-general (management) M. Janagarajan, the public auction process is very transparent and satisfies all parties, especially bidders, as it follows a set format. He said that the auction process at state JPJ offices have observers from the national audit department and the Malaysian Anti-Corruption Commission (MACC).

He was speaking to reporters after witnessing the public auction of vehicles at JPJ Terengganu yesterday. The auction at Kuala Terengganu saw 137 bidders going for 80 vehicles of various types. RM1.25 million was raised.

Curious as to where the cars come from? State JPJ director Zulkarnain Yasin said that of the 80 cars that went under the hammer, 59 were “cloned cars” (many of these are scrapped cars brought in from Singapore), 13 were motorcycles, four were other seized cars, three were small lorries and one was a pick-up truck. The highest winning bid of RM44,000 went to a Honda Integra (non-Type R DC5? super bargain for a DC2?) while the lowest bid was just RM50, for a motorcycle.

Anyone obtained a car from a JPJ auction before? Care to share your experience?