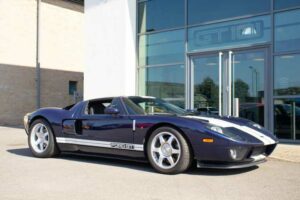 Perhaps the best-known GT of them all is back on the market, yours for £270k

Almost 20 years after its debut, the impact of the Ford GT can be hard to recall. Back in 2003 – much like in the early sixties – supercars were hardly a Ford speciality. Its most recent foray into mid-engined cars was the RS200, and the turn of the century didn’t find the Mustang in rude health. Of course, its hatchbacks were very good. But the GT40 was a distant memory, if you were old enough to remember it in the first place.

Consequently, while it was built to celebrate the Blue Oval’s centenary, expectations weren’t all that high for the new GT, what with the pick-up engine and very short development time. But the car’s significance was not lost on the manufacturer, and it went about things the right way, buying a Ferrari 360 Modena and using it as the high bar for its ambitions. Naturally the GT was much more powerful, yet it earned just as many plaudits for its handling – in short, nobody expected it to drive as well as it did. So improbable and spectacular was the GT40’s legend that it could never be adequately replaced, but Ford came as close as anyone could reasonably hope.

Its reward was tremendous hype; demand massively outstripped supply. More than 2,000 applications were made for only 101 build slots. One of the very lucky customers, you might remember, was Jeremy Clarkson. His was one of just 28 UK allocated Ford GTs, making it an extremely rare car. You might remember that his ownership experience wasn’t exactly painless – nor was he silent about it – but clearly the teething problems were eventually ironed out, because now, 25,000 miles later, the very same example is up for sale. Glad to see it got some use in the end…

“The most miserable month’s motoring it is possible to imagine” is how Clarkson described his time with the GT back in 2005. That said, his problem was very much with the security rather than the vehicle itself – “it’s a great, great car that was ruined by a useless ape who fitted a crummy aftermarket alarm system” – which means it was left to the next owner to fall in love with it. Clearly they did; they’ve held onto it since originally purchasing in 2006.

Said to be responsible for the “vast majority” of the current 24,454 mileage tally, the owner has also added KW suspension and an Accufab exhaust in their time with the car. The original parts have been retained for those wishing to return it to factory specification. Interestingly the Alpine audio system originally specified by Clarkson is still in place. As you might expect, the GT looks superb, particularly sat a little lower on the new suspension. A decade and a half has done nothing to soften its impact; aside from a few stone chips mentioned in the ad it looks to be in fine condition. With a long MOT, fresh service and decent tyres, the GT is ready for a new owner to add to that admirable odometer count.

Furthermore, by the standards of this car and celebrity ownership cases, this GT isn’t even very much money. Somehow there are still cars languishing with three-figure mileages for more than £350,000; Clarkson’s former steed is on offer at £269,000. Which doesn’t seem all that steep for one of the best cars Ford has ever made – and especially not for perhaps the most (in)famous example. At least you know all the early problems have been sorted now…