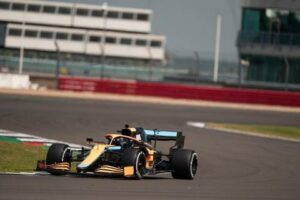 The Indian F2 racer completed 130 laps over 2 days of testing at the Silverstone circuit.

The Indian F2 racer completed 130 laps over 2 days of testing at the Silverstone circuit in McLaren’s 2021 F1 car, the MCL35M.

With the McLaren F1 test now under his belt, Daruvala is eligible to apply for a Super License – required to compete in F1. As per the eligibility criteria, a driver must earn 40 Super License points by competing in various international FIA series and must also have driven at least 300 km in a representative F1 car at racing speeds over a max of two days.

With Daruvala in his third year in F2, he has already earned the 40 Super License points. Now, with the 130 laps of track time in the MCL35M also completed, he meets the requirements to apply for the Super License, which takes him a step closer to making him the third Indian to race in Formula1.

Jehan Daruvala’s F1 outing was part of McLaren’s Testing of Previous Cars (TPC) programme. He is currently part of the Red Bull Junior programme and racing in the 2022 F2 season, positioned third in the overall championship.