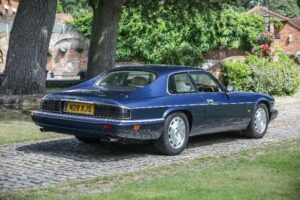 The Jaguar XJS. The big old brute with buttresses is not exactly everyone’s cuppa, I know. I know because, if I’m honest, I’m in the ‘everyone’ camp. I’ve always had the XJS pegged as rather frumpy. And lumpy, with those blocks of rubber and slabs of chrome that formed the bumpers, plus the fussy, jarring bits of black plastic trim stuck behind the rear side windows. Inside, it wasn’t much better. Swathes of cheap-looking BL plastic, the ‘70s switches, a trip computer plucked straight out of the Maplin’s catalogue and… what were the drum dials all about? All in all, the XJS had the capacity to make me feel a bit depressed the minute I got behind the wheel. Seriously, it made me glum.

This mood-lowering ability wasn’t made any better by the fact that Jaguar had – and Christ knows how – managed to make sitting in a 4.8-metre-long car feel like going potholing. It was so confined. Yet despite the all-consuming claustrophobia, the XJS managed to spread out like a shipping container on the road. It handled like one, too. The link between the big steering wheel and the front wheels was lost somewhere in the myriad mix of the rubber bushes and over-assisted hydraulics, and it heaved about like a ship in a storm on its slack-Harry suspension. The three-speed auto was bumbling and, somehow, the 5.3-litre HE versions felt slow – in every respect other than draining the tank. A big boot notwithstanding, I struggled to find the positives.

Then Ford wired some engineering budget to Coventry and Geoff Lawson had a crack at restyling it. I liked Lawson. He always came across well and it was a terrible shame he passed away so young, aged just 54. I know his back catalogue isn’t a panacea for sore eyes, but much of the time he was doing his best with the tools he was given, like stretching Mk II lines over a Lincoln platform to meet the expectation for the retro-styled S-Type. But his artistry in turning the angular XJ40 into the utterly sublime X300 was nothing short of genius. He didn’t manage quite the same feat with the XJS, but it was something akin to an ugly-duckling-to-beautiful-swan swing.

From 1991 the rear windows were enlarged, which removed those sharp-edged plastic panels, and the rear lights were tidied away behind a full-width tinted panel. The upgrades inside included a more modern instrument pack with proper dials, dropping the pre-war-look climate control switches and offering some lighter-coloured dashboard trims, which made it feel much airier. All these were pluses but the old-fashioned bumpers remained – until 1993 when they were replaced by one-piece body-coloured plastic bumpers and: ta dah. Twenty-five years after its inception, the XJS was looking modern at last.

I remember carrying out the PDIs on these later models and, instead of sitting in a gloomy storm cloud, they were bright, fresh and attractive, inside and out. The running gear had been upgraded, too. The ‘60s rear subframe, suspension and inboard brakes were revised, the gearboxes had become slicker, four-speed, electronically controlled ZF slushers, the AJ6 had become the more powerful and more efficient AJ16. Oh yes, and the 5.3 V12 had been bored out to a wonderful 6.0-litres. So, all in all, they drove a lot better.

I wrote the other day about how  the original Beetle had gone form woeful to wonderful over the years (in my mind), but that’s just the shift in my attitude. It isn’t the same thing with the XJS. I still think the earlier cars are pretty minging, but the later ones aren’t just better in my head, they’re just better. Full stop.

It would’ve felt like my numbers had come up had I stumbled across one in Ice Blue, which is just a fantastic shade on any Jaguar of the period. In the end I had to settle on this Sapphire Blue car, which is still very handsome, if a little conservative. It works well with the Oatmeal hide, though, which, being a Celebration, has contrasting piping, and the walnut veneer still looks rich, giving the interior its sense of occasion. It looks pretty clean, too, for a car that’s approaching 100,000 miles and its thirtieth birthday, and the fact that those diamond-turned Celebration wheels still shine so brightly is a good sign. They almost certainly would’ve needed resurfacing by now, which means someone’s not skimped on the refurb cost with a coat of silver paint.

So, there we go: a lovely old girl, don’t you think? Or do you think the original XJ-S was the pick of the bunch? In which case, tell me why in the comments below. Happy to be persuaded by enthusiasm.