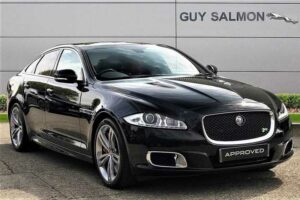 The 550hp XJ was near enough irresistible new; this one is £25k…

For those that were wondering – no, we aren’t done mourning the demise of the Jaguar XJ just yet. Grieving takes time. Yes, we’ve had the announcement of Jaguar’s electric future and, yes, the PH Carbituary has been written (that’s when you know it’s gone), but we’re still struggling to come to terms with a Jaguar range that won’t have a large saloon as its flagship. Not even an EV one. Jaguar without an XJ feels like Ferrari without a V12 range-topper, or Mercedes discontinuing the S-Class – as a mainstay of the manufacturer for so long (50 years in this case) the demise takes some time to sink in.

Plus, of course, no XJ means no XJR – perhaps the greatest loss of all. For 30 years it represented the car at its very best, keeping the luxurious, opulent side but injecting it with some gratuitous performance edge. Given the firm’s history with the genre, you might have argued XJRs were the best Jaguars on sale. Those who drove them surely wouldn’t have disagreed.

Through six- and eight-cylinder engines and four generations from XJ40 to X350, you knew what to expect with an XJR: unassuming to look at, unbelievably fast, unerringly lovely. But perhaps a bit samey, especially with fast evolving competition from the likes of Audi (S8), Mercedes-Benz (S-Class AMGs) and even Maserati once it sorted the Quattroporte out.

There was nothing familiar about the X351 XJ. Power soared, from 420hp to 550hp, thanks to the 5.0-litre V8 replacing the old 4.2. But it was the styling that represented the most drastic change, the big Jaguar saloon now a modern, distinctive four-door rather than a minor update of what had gone before. It rendered the old ones (and a lot of the competition) staid instantly, the ‘R’ adornments complementing the basic shape perfectly.

Reassuringly for those not sold on the looks, the XJR still drove in the traditional Jaguar fashion – which is to say beautifully. Firmer than standard, of course, but still fit for any situation. Indeed, so content with the XJR were Jaguar that it stayed pretty much unchanged from launch in 2013 until 2018, when it was replaced by the XJR575. Which was, to all intents and purposes, more of the same.

This one isn’t a 575, but it is £25,000 – the cheapest we’ve yet seen one of these XJRs, and about a quarter of its price when new. How much lower can a car of this calibre go? As a 2014 car with more than 60,000 miles, it’s one of the higher mileage Rs out there, but presents well. Quite frankly, who could resist driving everywhere with an XJR at their disposal? The sombre black colour scheme is jazzed up with red leather, the interior looks unblemished (if now dated) and there seems little cause for concern outside, either. Not many will assume it cost i20 N money, put it that way.

Furthermore, £25k isn’t just cheap for an XJR – it’s cheap for anything of this ilk. An S63 AMG of similar age and mileage, albeit with more power, could cost £40k; even an Audi S8 is more money than this in comparable condition. And it’s being sold at a franchised Jaguar dealership. This seems a bargain whichever way you look at it.

Because who cares if it loses more money while never doing more than 20mpg? This XJR is an end of an era car, the kind of which – as is being said all too often now – isn’t going to happen ever again. We didn’t know it when the car was on sale, but it signed off the V8 Jaguar saloon in fine fashion. For that reason alone, it would be worth the money; its status as one of the great recent supersaloons only serves to make it more desirable.