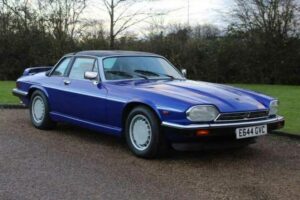 So wrong it's right?

Some victories are knockouts, and others are won on points. This week’s Pill falls into the latter category when it comes to braveness. Lots of the elements of this well-priced Jaguar XJ-S might seem only moderately courageous on their own, but lumped together it is definitely one our our bolder offerings.

The first part of the prosecution’s case is the famously shonky build quality that was still affecting all Jaguar products in the mid-80s, with this borne out by our Pill’s MOT history being chequered enough to use as a chess board. Next comes the purple colour scheme that even the Artist Formally Known as Prince might have regarded as excessively mauve, plus a rear spoiler that couldn’t look more incongruous if it was covered in fairy lights. Then consider the fact that this is one of the earlier Targa-style XJ-S convertibles, the ones that left a substantial amount of framework in place even with the fabric roof folded. And finally there’s both the six-cylinder engine in place of a creamy V12, and the unexpected sight of a chunky gear lever where the delicate selector for an autobox would normally go. Yep, this is a very rare manual convertible.

Stuck together, that list in a car that is always going to be fishing in a very small pond for potential buyers. Something the selling dealer has acknowledged with an enticing price tag. Granted, £8,995 isn’t the bottom of the market for an XJ-S these days – the imbalance between supply and demand that has dogged the car for most of its existence means rougher examples do still turn up cheaper. But our Pill has also been given some extensive recent restoration work, including a bare metal respray into the eye-bruising colour.

The six-cylinder XJ-S felt like a car that arrived well after it should have done. The original XJ-S had been launched with a V12 engine, reaching the market just before the mid-70s fuel crisis arrived to make the GT’s low teens mpg look unacceptable. Jaguar quickly developed a revised ‘high efficiency’ engine, although ‘higher’ would be closer to the mark – revised cylinder heads and fuel injection moved economy closer to 20mpg, if rarely getting it over the mark. Fearing that didn’t go far enough, Jaguar also commissioned a smaller engined XJ-S that would use a 3.8-litre AJ-6 six-pot for better mpg and lower entry-level pricing.

By the time this arrived in 1983 the decade was booming and the fuel crisis over. The six-pot XJ-S had 225hp, which was still enough to qualify it as a proper sportscar by the standards of the age, and some reviewers reported that the lighter powerplant did indeed improve handling responses. But as with many of the era’s attempts at downsizing it didn’t actually save much fuel; real-world economy wasn’t much better than the V12 when driven at a similar pace. So the 3.6 and later 4.0-litre sixes were always seen as poor relations to the V12s.

The original XJ-S Convertible’s awkward roof was another half measure, although one that Jaguar couldn’t be entirely blamed for. The combination of increasingly tough American roll-over protection standards and the risk aversion of British Leyland’s lawyers had created a belief within the company that some external protection framing was necessary for crash compliance, leading to the structure created for the Triumph Stag. The XJ-SC arrived more than a decade later, but it sported a very similar exoskeleton, with a full-width bar running between its B pillars when the roof was down, and the continued use of the coupe’s fully framed doors. The quantities of wind in hair were similar to those of a full convertible, but it looked inelegant.

In this fashion conscious part of the market inelegant struggles to sell, especially as rival manufacturers were still offering fully convertible convertibles. Soon after the XJ-SC was launched an American coachbuilder, Hess & Eisenhardt in Ohio, started to produce its own fully decapitated convertible XJ-S, which looked much better and seems to have encouraged Jaguar to try again. A new fully convertible XJ-S arrived in 1988, and from that point onwards the Targa cars looked as if they had got lost down an evolutionary dead end.

Our Pill is a 1987 Targa-style XJ-SC convertible, and one that had clearly led an interesting life to judge from its MOT record. It failed its first digitized test in July 2006 on the basis of pitted discs, a below-par parking brake and a corroded suspension attachment. All these issues were sorted, with a clean pass recorded the following month. But the Jag’s next MOT came five years later, producing a much more serious list of failure points including an insecure steering rack, excessive corrosion in both sides of the front structure and an excess of exhaust carbon monoxide. The car was put in for another test two weeks later in what seems to have been a triumph of hope over experience. The engine was now in tune, but none of the structural faults had been addressed and the tester even managed to find a few more for good measure.

It was the sort of ‘not even close’ MOT fail that would be a death warrant for most cars, but somebody clearly loved this XJ-S. Another five years passed before another MOT produced an even more grizzly fail sheet in April 2016, the reported rust now spreading to the rear structure and front crossmember. But then, in an act that seems to have been driven by pure love and what must have been a sturdy bank account, the car got properly sorted out – with a clean pass recorded four months later. Another gap in use followed, but the MOTs in 2020 and 2021 were both advisory free, although with only 50 miles between them.

The advert says our Pill’s body kit, alloy wheels and rear spoiler are genuine TWR parts, applied at the same time as the rebuild. The combination of the pseudo-wing and the fabric roof looks deeply odd to me, although you may regard it as the height of sophistication. No matter; it would be relatively simple to remove it given the helpful shot showing it is held on by just four bolts inside the bootlid. The rest of the car looks pretty decent in the images, and presuming the structural work accurately targeted the car’s corrosion it may well be that rarest of things, an inexpensive, rust-free Jaguar XJ-S. The manual gearbox is also a real novelty, just four of the 44 XJ-S currently listed in the classifieds have one; it might not suit the car’s character as well as the auto but it will always be a conversation starter.

So, to summarize, our Pill is the wrong convertible with the wrong gearbox wearing both a courageous colour and an oddball bodykit. Yet the basics actually look well sorted and sensible when compared to the rust and risks common to cheaper versions of the XJ-S. You could never accuse this one of being a dull or obvious choice, which is one sort of brave.