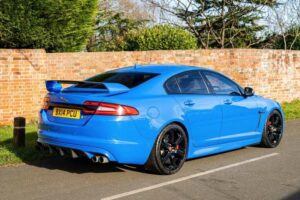 Even shot in very low light, there was something immediately arresting about the paint of Jaguar’s new Le Mans-themed F-Pace SVR special edition. Apparently 40 different variations on ‘Midnight Amethyst Gloss’ were assessed before deciding on the final shade, and it looks well worth the effort. What a sight that ought to make when it gets out on the road. Which got us thinking about the other memorable Jaguar colours out there – the ones that aren’t just dark green, of course. Immediately the orange of the F-Type SVR came to mind (itself very similar to the CX-75’s colour), or maybe the Sorrento Yellow the facelift was launched in, or the Caesium Blue that made the F-Pace SVR stand out – or anything the Project 8 was offered in.

Then, of course, there’s the French Racing Blue that became the trademark paint of the XFR-S. Oh sure, it had been seen on Jaguars before the 550hp saloon, and the car itself was both available without the spoiler and eventually as a wagon, but when you picture French Racing Blue a car like this is what you see. Similarly, if not the XFR-S most people bought, a bright blue one with the silly spoiler is the image conjured when  discussing that Jaguar. It’s impossible not to – especially with all those skiddy images in the media being of the blue car.

This being a Jag, however, the XFR-S was rather more sophisticated to drive than onlookers may have been led to believe. As well as more power than the standard car (550hp versus 510), spring rate was up for the S by 100 per cent, the gearbox was recalibrated, the aero package tested in a wind tunnel (not just tacked on), the wheels wider, the Pirelli tyres bespoke and the steering tweaked with some bits from the F-Type. It wasn’t just the paint and the wing, even if everybody knows the XFR-S for the paint and the wing.

So let’s have one! This XFR-S, one of what’s believed to be just 135 or so in the country, is French Racing Blue with the standard spoiler, plus the black six-spoke wheels and red calipers. It’s the full scallywag super saloon spec and, if perhaps not what many envisaged for an £80k Jaguar XF, certainly makes it something to behold a few years down the line. There are more than enough black and grey four-doors out there.

Eight years old over the weekend and coming up to 60,000 miles, this XFR-S is being sold with a full Jaguar service history, a recent paint correction (so your eyes don’t deceive you; it really does look that good) and a new set of Kumho tyres. Which ought to last a couple of weeks, at least. The price is £35,995, or less than half its new RRP – even rarer and sillier than standard, the S couldn’t escape the depreciation that afflicts almost all fast Jag saloons.

Actually it’s not fair to single out Jaguar for that, as fast four-doors aren’t generally renowned for their residual strength. And, in fact, the XF’s rarity now counts in its favour: spend £35k on an M5, E63 or RS7 and they’ll tend to be newer or lower mileage. Or both. But as the end draws near for the V8 Jaguar, so the most special of its saloons will surely be prized. And the bright blue one with the wild wing was even more special than most.