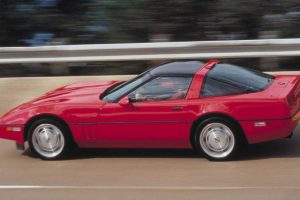 Every new Chevrolet Corvette has brought significant advances to the iconic sports car. But with the exception of the C8 moving the engine, I’d wager no Corvette changed the game quite like the C4 in 1983. Design, handling, construction techniques, in-cabin tech—all huge leaps compared to its ancient predecessor hailing from the 1960s. The one area it didn’t improve was its engine, carrying over the old 200-horsepower small block V8. GM tried to cover this by adding a new transmission known as the Doug Nash 4+3. But it was as weird as the name suggests, and it nearly ruined the car for the first six years.

The Doug Nash 4+3 was a four-speed manual with an automatic overdrive on the top three gears. Needless to say, this hack job of a transmission was anything but a tight and sporty manual. Its two-speed overdrive was supposed to engage on its own when the driver eased off the throttle in a higher gear, with a system on/off switch in the cabin. It worked in theory, but the clunky 4+3 was immediately plagued by durability and reliability issues.

After the first model year, Chevrolet replaced the C4’s L83 small-block with the somewhat more powerful and fuel-efficient L98 V8 for 1985, resulting in a base price increase of $3,091. Keeping the sluggish 4+3 transmission right where it was, by 1987 GM upgraded its V8 with roller hydraulic lifters for 245 horsepower, only to continue with a revised suspension system for 1988. All these small improvements led to the 1989 Corvette, the first C4 truly worthy of its badge.

All in all, 1989 was a wild year for the C4. While Callaway continued to offer twin-turbo Sledgehammer Corvettes through GM dealerships with a warranty, the factory itself introduced its top dog ZR-1 with the DOHC LT5, also creating a prototype powered by a 454 “Big Block” called the ZR-2. More importantly for those who couldn’t afford waiting for the limited-production ZR-1, the final Corvette of the 1980s came with a new manual gearbox sourced straight from Germany.

It’s not to say that ZF’s six-speed stick was the perfect shifter. Its two top gears were still overdrives, and to improve fuel economy at low speeds, the electrics would even lock you out second and third. Fortunately, MotorWeek points out that this feature could be disabled after a careful examination of the C4’s wiring diagram. Cut the wrong wire though, and your C4’s digital dash would also certainly stop lighting up like a Christmas tree.

Still, with some experience regarding three pedals, the 245 horsepower “tuned port injection” L98-engined Corvette could finally deliver the driving experience Corvette buyers were looking for. While a sprint to 62 mph in 6.1 seconds, or its quarter-mile time of 14.3 seconds wasn’t gonna break any records, those fantasizing about the ZR-1’s speeds could also get the car with the Z51 handling package including 17-inch alloy wheels wrapped in 275-wide rubber, and the FX3 pack adding the Delco-Bilstein selective ride control system, preset for Touring, Sport and Performance.

With a transparent composite roof and GM’s optional six-way power-adjustable leather bucket seats costing buyers an extra $1,025, the 1989 Corvette was a far more capable sports car than any C4 from the first five years of production. As a result, MotorWeek had plenty of fun with its fairly loaded ’89 test car around the track, despite being fairly sure that for the 1990s, the ZR-1 would offer a 179-mph ride with handling hardly compromised by its 200-pounds of extra weight.