Is Domino’s New Autonomous Robot the Future of Pizza Delivery? 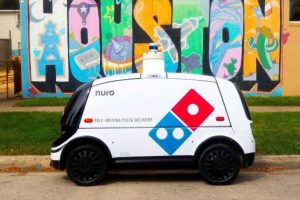 Ever feel like the pizza delivery person is judging your life choices? “Two large pies—is anyone else home?” Or, “Really? A $2 tip?” Maybe you just don’t like interacting with other people, hence the pizza delivery order in the first place. Rather than dealing with a restaurant’s worth of potential interactions, you’ll work up the courage for a single meeting with a delivery driver. Has Domino’s Pizza got the solution for you: A pizza delivery robot.

Yes, the robots have come for your pizza delivery jobs, but before you rise up with pitchforks raised, put down that lighter and the molotov cocktail and, instead, relax. The R2, the self-driving pizza bot made by Nuro, is only being pressed into service in Houston, Texas. For now, at least.

Keep in mind, Domino’s has been living at the bleeding edge of pizza-delivery tech for the past few years, notably with its DXP pizza delivery vehicle (based on the previous-generation Chevy Spark hatchback) and more recently with Carside Delivery, a contactless pandemic-related pizza-pickup method in which Domino’s franchise workers drop pizzas in your trunk or cargo area.

The Nuro pizza delivery bot is somewhat unique among a developing class of autonomous vehicles, some of which have been testing for the past few years in various locales around the country. It’s claimed to be “the first completely autonomous [occupantless] on-road delivery vehicle with a regulatory approval by the U.S. Department of Transportation.” What that means is that Nuro was able to get the department to ignore some of its safety regulations, all of which were written under the assumption a vehicle would have humans on board. No need for belts or a windshield when, well, there is no one riding in a Nuro. Don’t laugh. Nuro had to seek out exemptions to more arcane regulations than you might imagine just to make the R2 possible.

Domino’s isn’t Nuro’s only dance partner, either, as the startup has worked with Kroger on delivering groceries autonomously, too. So, while this will be the Nuro R2’s first experience commercially delivering pizzas (albeit only in Houston, from a single Domino’s location), it likely won’t be its last. Nuro has partnered with Michigan-based firm Roush (yes, that Roush, which also modifies Ford Mustangs and F-150s), as Roush is actually a manufacturer and a supplier.

The Nuro R2 is small and can travel on public roads at speeds of up to 25 mph. It is a little under four feet wide, a smidge over six feet tall, and casts a shadow nine feet long. It is powered by a 31-kWh battery and features a full array of sensors capable of mapping out 360 degrees of its surroundings (including 360-degree overlapping camera feeds, thermal imaging, lidar, short and long-range radar, microphones, and short-range ultrasonic sensors).

Want to see it in person doing its thing?

You’ll only be able to order autonomously delivered pizzas from the Domino’s store in Woodland Heights, and only via the Domino’s website … and at specific times on certain days. You must opt into having your order delivered by the Nuro bot, and even then, you must be “selected” for the privilege. Those lucky enough to get a shot at R2 delivery will then be given text-message updates on the bot’s progress, along with a special PIN for retrieving their order from the R2 robot when it arrives. (The cargo lives behind a PIN-protected door.) Enter the PIN on the vehicle’s touchscreen, and the door will open so you can grab your pie. The future is now, and now we are suddenly hungry for pizza.

READ MORE
Domino’s Gets into the Car Business with DXP Pizza-Delivery Vehicle
Pizza Hut’s TMNT Pizza-Thrower Tank Gives Delivery a Whole New Meaning
Captive Audience: How We’ll Be the Ones Who Pay for Autonomous Mobility