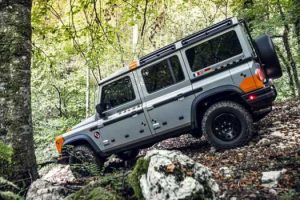 Ineos took an important step this week in becoming an automaker, having purchased a factory for the production of its Grenadier SUV and truck. The plant in question is a Smart factory owned by Mercedes-Benz, with Ineos agreeing to maintain production of the Smart EQ at the site for a period of time, in addition to some other components. The Grenadier models, meanwhile, are scheduled to begin rolling off the assembly line at the plant in late 2021.

The Grenadier SUV and truck were developed with help from Austria’s Magna Steyr, a longtime engineering and supplier giant best known in the U.S. for producing the Mercedes-Benz G-Class. The Grenadier is expected to be powered by BMW gas and diesel engines, and prototypes have already been shown to the public earlier this summer.

“This acquisition marks our biggest milestone yet in the development of the Grenadier,” said Dirk Heilmann, chief executive fficer of Ineos Automotive. “Alongside the exhaustive testing program that our prototype vehicles are now undergoing, we can now begin preparations at Hambach to build our 4×4 from late next year for delivery to our customers around the globe.”

The Grenadier models are now headed into production in what seems like an amazingly quick span of time. It was a short three years ago that Ineos founder Jim Ratcliffe came up with the idea in a London pub, of producing a Defender-like vehicle that would remain rugged and as simple as possible, instead of following the new Land Rover Defender upmarket into luxury territory.

“Hambach is the ideal facility for production of the Grenadier,” the company said. “One of Europe’s most modern automotive manufacturing sites, it is home to a highly experienced and capable workforce, has an excellent track record amongst Mercedes plants for the quality of its output, and recently benefited from a major investment to enable the production of larger vehicles. Additionally the site’s location on the French-German border, only 200km from Stuttgart, gives excellent access to supply chains, automotive talent and target markets. Manufacturing at Hambach ensures that Ineos remains on track to meet its plans to deliver the Grenadier to customers in early 2022.”

It remains to be seen just how wide of an audience the Grenadier will reach, and what the annual output will be. Ineos has yet to detail its plans for a sales and service network, but already has over 15,000 people who’ve registered their interest in the vehicle. The company has indicated that it will need to produce about 25,000 examples a year to be profitable, which is still a daunting target for an entirely new automaker. But at the same time Ineos is keeping its expectations grounded, and is not aiming to rival Wrangler production volume and sales worldwide.

Speaking of sales, Ineos indicated earlier this year that the Grenadier wagon will kick things off at around £40,000 at launch, which translates to about $53,500. That’s not entry-level Wrangler money, and it’s also not Range Rover money.

But, the Grenadier will still have to differentiate itself from the new Defender, which starts about $10,000 south of the $53,500 mark, taking that at face value at the moment. Perhaps like with other vehicles, less expensive versions of the Grenadier will appear over time.