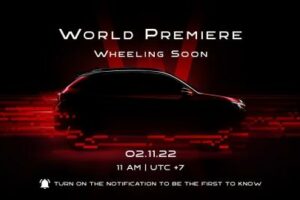 The new WR-V is said to be the production version of the SUV RS Concept.

Honda has released a teaser of its upcoming compact SUV for the Indonesian market. It will make its official debut on November 2, 2022.

The teaser shows the car in its side profile with a large ‘W’ in the background. This has led to speculations that it could be christened as ‘WR-V’.

The new WR-V is said to be the production version of the SUV RS Concept. The vehicle featured in the teaser has a dual-tone exterior with a coupe-like roofline. The crossover appears to have an upright front fascia with sleek LED headlamps.

There has been no word regarding the powertrain options that will be offered on the new crossover from Honda. However, we can expect a range of petrol and engines, including a turbo-petrol unit.