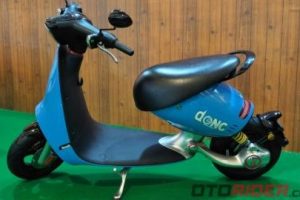 Benelli has introduced the Dong electric scooter in Indonesia. The new e-scooter is offered at a starting price of Rp 36,800,000 (on-road Jakarta), which is the equivalent of Rs. 1.90 lakh.

The electric scooter has a funky design with a cylindrical shape under-seat panel housing the battery and motor. The footboard tapers towards the rear which features a silver-finished swingarm.

The Benelli Dong comes with features such as LED headlamps with integrated circular LED daytime running lights, LED tail light at the rear, a negative LCD display for the instrument cluster and a large grab rail at the back.

The electric scooter is powered by a 1.2 kW electric motor that produces 24.8 Nm. Benelli claims that the Dong e-scooter has a range of 60 km on a single charge and a top speed of 45 km/h.

Reports suggest that the new electric scooter from Benelli is Asia-specific, which means that the Dong could make its way to the Indian market at some point in the near future. However, Benelli is yet to make any official statement regarding the same.