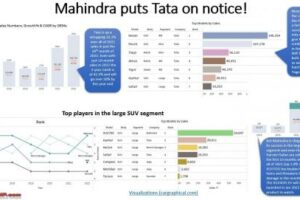 The other story of this month is the fight that Mahindra is giving to the Tata.

BHPian niranjanprabhu recently shared this with other enthusiasts.

1. Great sales in October through slightly lower than in September

2. Alto tops the charts and though many would be tempted to think that this model is India’s No 1, it’s the Wagon R ruling the roost. There has been a fantastic upsurge in demand for this car in the last 2 years and sales have gone up by almost a quarter from 2019 and is at an ALL TIME HIGH despite this car being over 20 years in the making. BTW Alto is way off its all-time high sales and like all hatchbacks is seeing a waning demand. 3. The Swift is losing appeal like all cars in the hatchback segment (see my research at the Cargraphical links provided in the reply section of this post) and so is the Baleno/Glanza which despite the refreshed new model is below the historic highs that it attained earlier. 4. Dzire is another car that is witnessing dampening demand. almost at 50% of the demand seen 5 years ago. The sedan markets are simply down and will only simmer on from here. A few new launches could show some upsurge but overall in the mid to long-term, the trends are not promising. 5. Vitara Brezza, Ertiga and Eeco are the other promising top-selling Maruti models that are doing good in terms of maintaining momentum. Hyryder and the Grand Vitara have made a good beginning in the Mid-Sized SUV markets and hopefully will give the required fillip in a segment that was almost a Korean monopoly a few months ago!

The other story of this month is the fight that Mahindra is giving to the Tatas. Both of them lack a presence in the brilliant mid-sized SUV segment ruled over by the Hyundai Creta and Kia Seltos with the German Twins and the Japanese combo of Toyota and Suzuki making a splash. They have to give this segment serious thought and with the XUV4OO and the Nexon Coupe that would be launched next year, they will be making their presence felt here albeit in the EV avatars. ICE is not dead and they need to take that bold decision of continuing to invest in the technology for some more time to come.

Their sales are at all-time highs but Mahindra is zooming pretty fast in their rearview mirror with the brilliant XUV7OO and the upcoming XUV4OO. I have categorized the Scorpio-N as a Utility SUV. Had that too gotten into the Large SUV category like the XUV7OO, the situation would look even more skewed for the Tatas