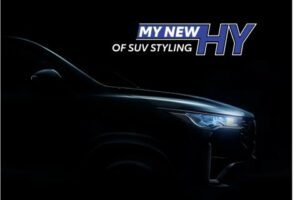 The MPV is set to make its debut on November 21 and will be unveiled in India four days later.

Toyota has released a teaser image of the India-spec Innova Hycross on social media. The MPV is set to make its debut on November 21 and will be unveiled in India four days later.

The teaser image partially reveals the front fascia of the Innova Hycross. The car, seen in side profile, has wraparound LED headlights and a trapezoidal grille. The front bumper appears to have triangular vents housing fog lamps on either side.

On the inside, the Innova Hycross is expected to get a large touchscreen infotainment head-unit, a panoramic sunroof with roof-mounted AC vents, ambient lighting, and height-adjustable seat belts, among others. The MPV will also get Advanced Driver Assistance Systems (ADAS).

The Innova Hycross is said to be based on the TNGA-C platform and will be front-wheel drive only. It will be powered by a 2.0-litre petrol-hybrid engine, details of which, are still unclear. In India, the Innova Hycross is expected to be positioned above the current Innova Crysta.