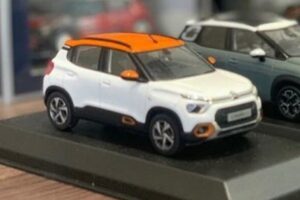 The Citroen C3 will be based on the modular CMP platform.

Having launched the C5 Aircross in India, Citroen is now shifting its focus to the compact SUV segment. Earlier this year, we had reported that the carmaker has lined up a crossover codenamed CC21 for India. The car’s design has now leaked via images of a scale model.

As expected, the French crossover looks like most modern Citroen SUVs. The same quirky styling has been implemented on a vehicle with a smaller footprint. The front fascia is similar to the C5 Aircross with stacked headlamp clusters.

At the rear, the tail lamps have C-shaped brake lights and an overall clean design. The dual-tone colour scheme and diamond-cut alloy wheels seen on the scale model add to the car’s sporty appeal.

The Citroen C3 will be based on the modular CMP platform. The crossover is expected to be powered by a 1.2-litre turbo-petrol engine paired with a 5-speed manual transmission. It might also get a dual-clutch automatic as an option.