In 1968, Toyota Used These Cartoon Illustrations in Owner’s Manuals 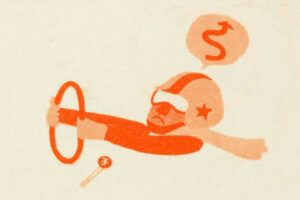 I’ve been doing a lot of work on my heavily customized 1969 Toyota Corona coupe lately, converting it from show-only machine to something that I can take on long road trips, and I so I’ve finally cracked open the factory owner’s manual that came with it. This book— which turned out to be for the 1968 model year Corona— isn’t the all-business sort of publication that Toyota issued for later vehicles. Instead, it’s packed with entertaining cartoon illustrations.

For example, the first page of the Maintenance chapter has this guy, about to dive into the guts of his 3R engine while wearing a three-piece suit with pocket handkerchief. As one does.

Photographs of Toyota factories in Aichi Prefecture are included as well, showing Toyota’s pride in rebuilding after World War II.

By about the late 1970s, even the most bare-bones economy cars sold in the United States had electrical systems far too complex to be depicted on a single fold-out page in an owner’s manual. Back in 1968, though, it was still possible.

Check out the gallery below for more Corona manual illustrations: