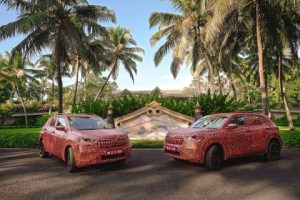 The Kushaq will be offered with two turbo-petrol engine options.

Skoda has released official images of the pre-production Kushaq crossover, which is scheduled to make its global debut in March 2021.

The Kushaq will be based on the locally developed Modulare Querbaukasten (MQB) A0 IN platform. The crossover has a wheelbase of 2,651 mm and is the first product developed under the India 2.0 project.

The images indicate that the design of the Kushaq is heavily inspired by the Vision IN Concept that was showcased at the 2020 Auto Expo. The crossover has the brand’s familiar front fascia with LED headlights and daytime running lights. It has crisp lines on the sides and LED tail lights. The car also gets roof rails and it rides on 5-spoke alloy wheels.

In terms of features, the Kushaq will be equipped with a touchscreen infotainment head-unit, automatic climate control, up to 6 airbags, ESC, Hill-Hold Control, rain and light sensors, cruise control an tyre pressure monitoring system.

In India, the Kushaq will be offered with two turbo-petrol engine options. These include a 1.0-litre TSI and 1.5-litre TSI engines. Transmission options will include a 6-speed manual, 6-speed automatic and 7-speed DSG.