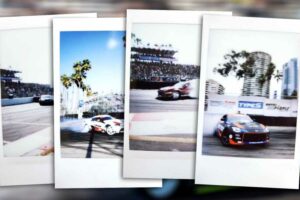 In addition to seeing awesome cars throw themselves sideways around turns, another wonderful thing Formula Drift gives us is the opportunity to practice photography. You’re usually sitting close enough that you can grab at least a couple of really cool photos. Just for fun, I thought I’d bring my cheap instant camera to this past weekend’s Long Beach season opener. The results came out way better than I could have ever imagined.

I’d bought the $70 Fujifilm Instax Mini 11 instant camera (in Sky Blue, duh) as a party favor a few weeks back and had some film left over. Why not bring it to FD? Could be fun. It’s lightweight and slim and fit unobtrusively in my camera backpack. There’s a 60mm lens and the shutter speed is automatic-chosen based on lighting conditions with a permanent ISO 800. With the built-in flash, it worked great with taking pictures of my friends in a dark bar. But now, I’d be outside in full daylight taking pictures of cars between 15 to 50 feet away.

It’s been a hot minute since I’ve shot film. I exclusively shoot digital because it’s cheaper, faster, and I don’t have to be as choosy when I decide to click the shutter. Digital space is basically free and unlimited so I’ve enjoyed the luxury of the spray and pray style of shooting a motorsports event. But seeing as Amazon charges $13.98 for a pack of 20 instant photos, I was basically spending around 70 cents a shot. My cheap ass had to make them count.

Standing at the Touch & Go 1 straight (you can see an FDLB track map here) and facing the Outside Zone 1, the first batch of photos actually came out pretty nice. They were overexposed as all hell, but the grainy quality of the photo itself actually added to the aesthetic in an extremely cool way. 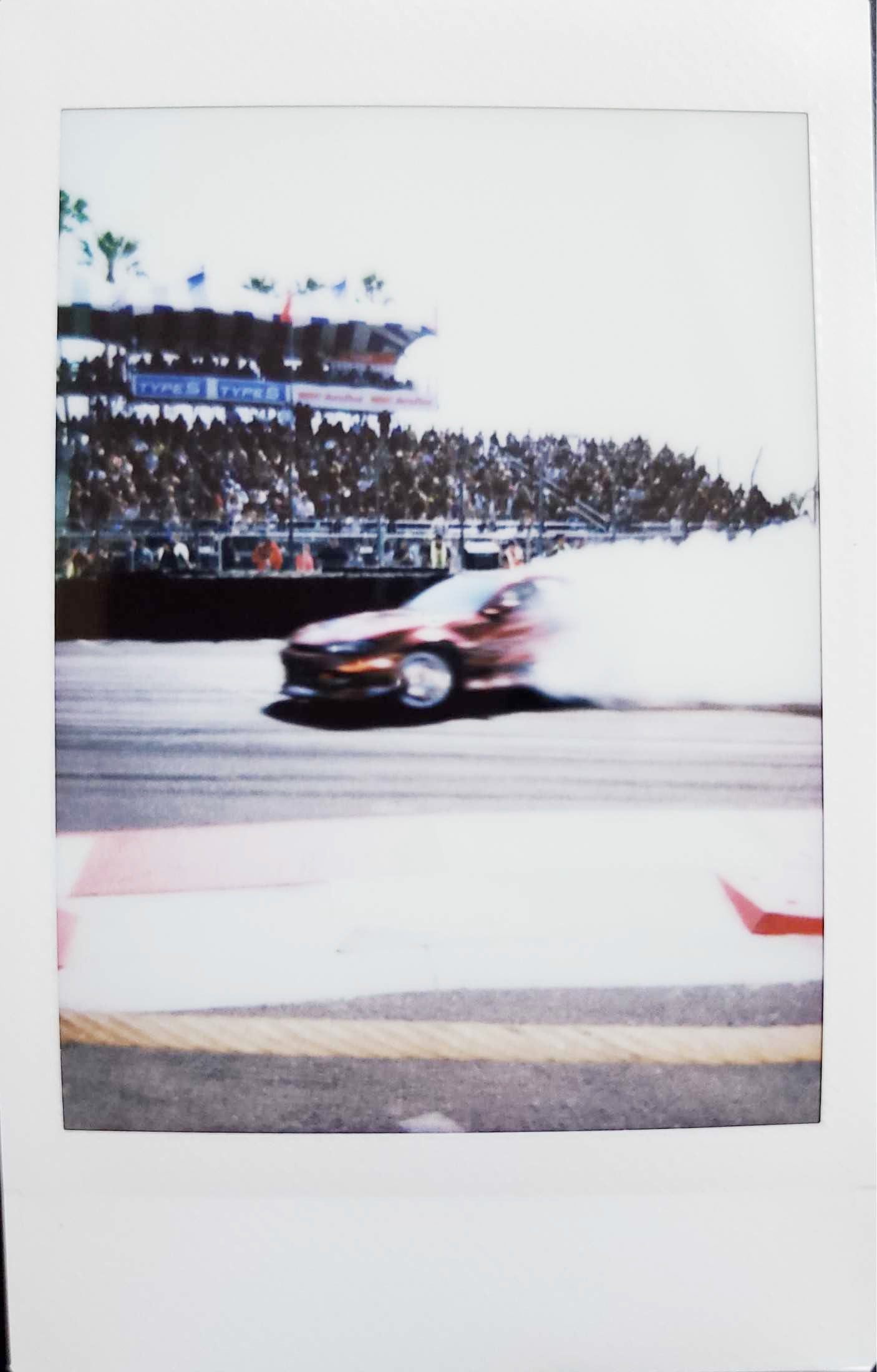 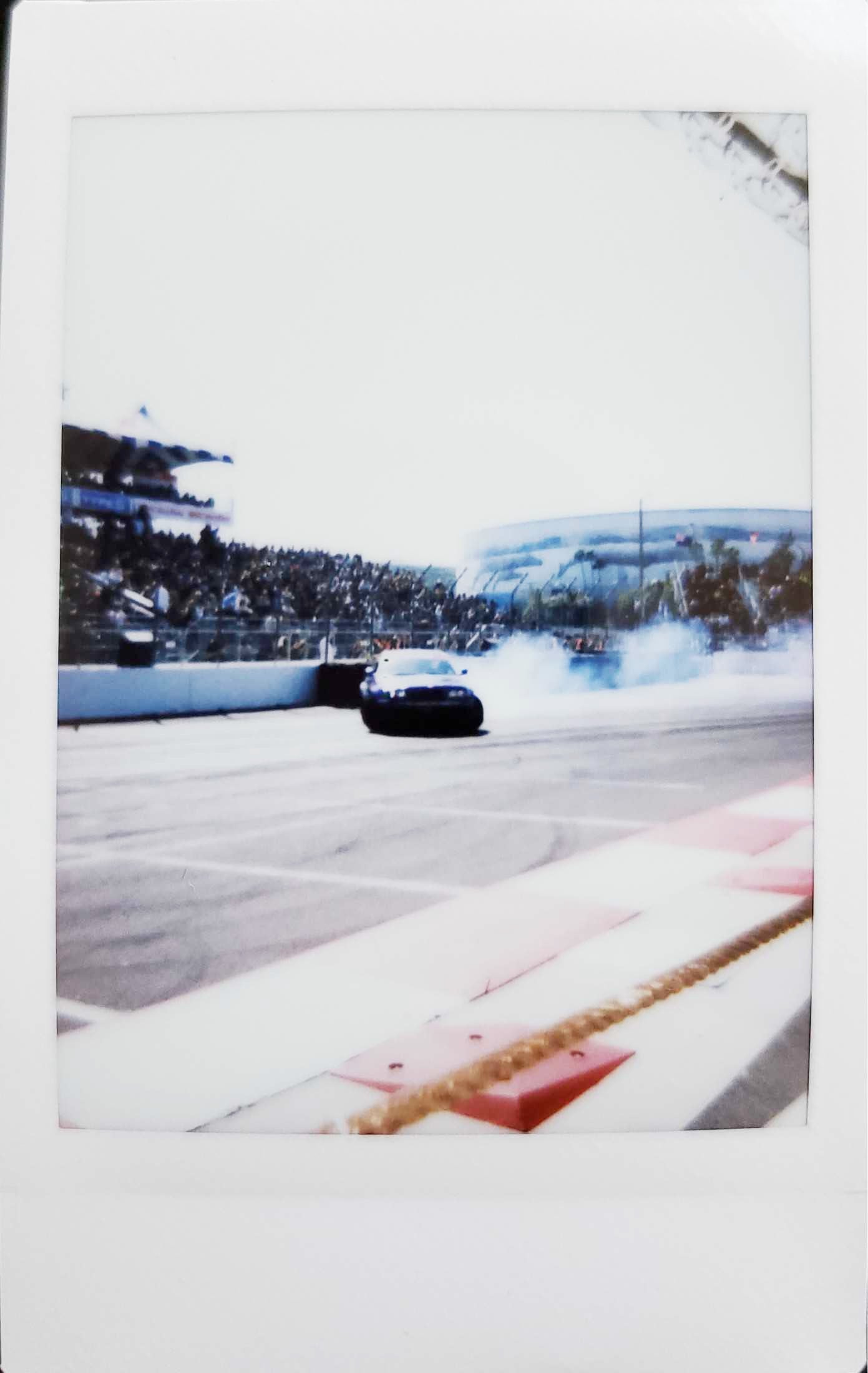 Needless to say, I was very pleased. The Instax’s wide-angle viewfinder made it easy to take in the whole scene and the resulting photo came out pretty close to what I saw with my eye.

Still, I wanted the cars to take up more of the frame so I walked a little further to go hang out at the Inside Clip 1 hairpin turn. Everyone drives the slowest around this turn, so it was a good opportunity to really place the cars in the frame. 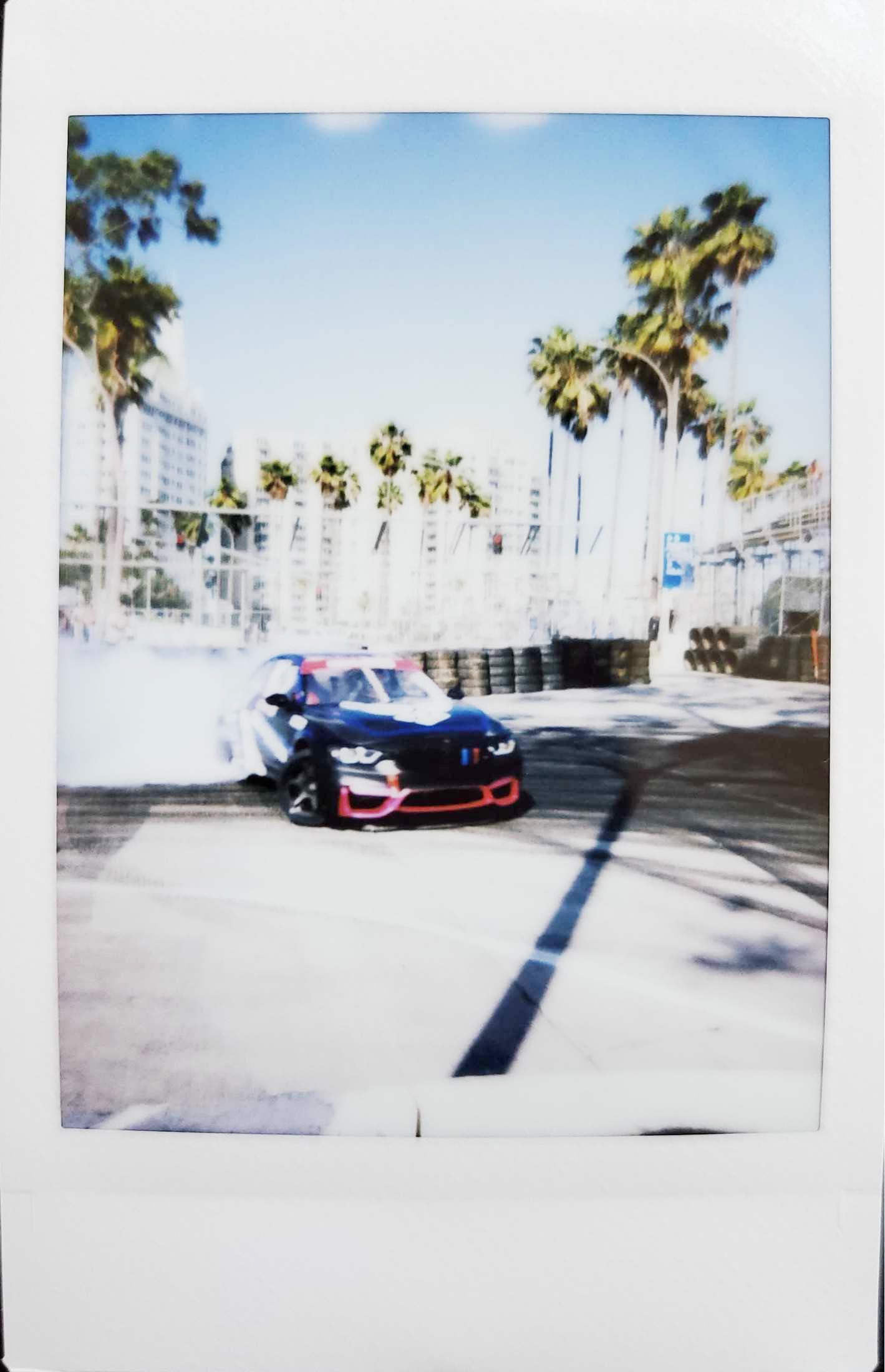 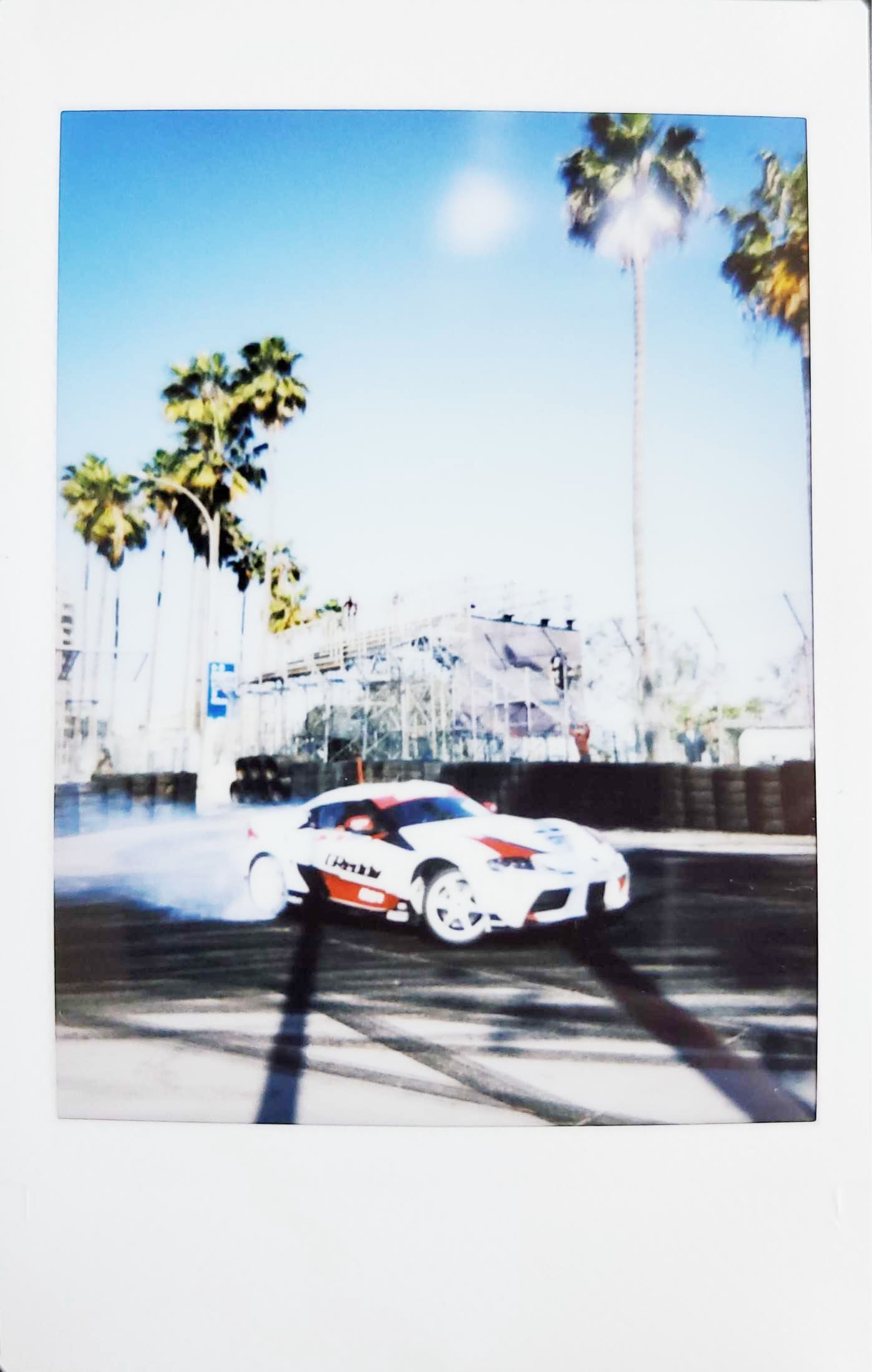 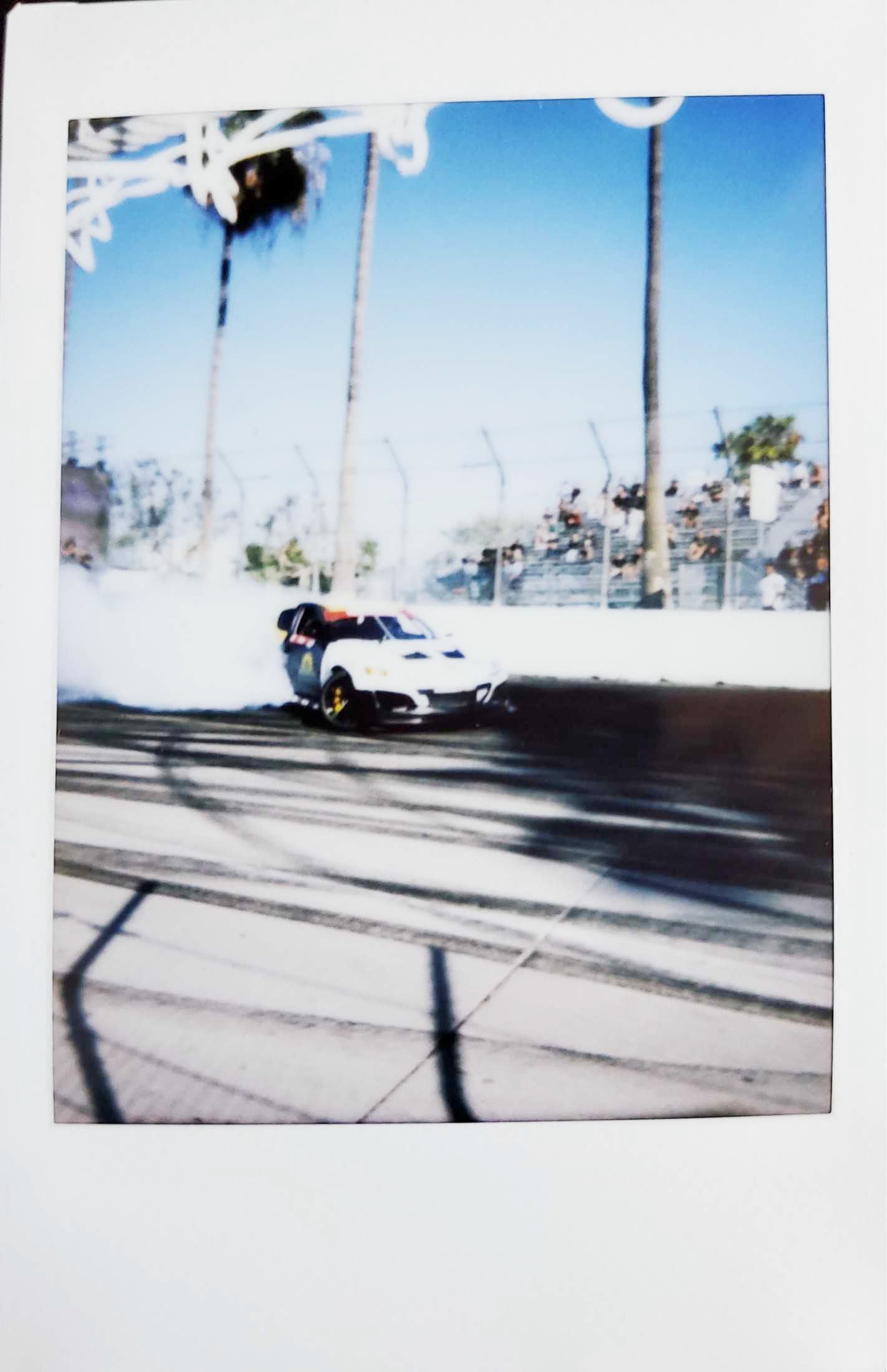 I really tried to get the palm trees in these shots. The longer I’ve shot, the more I realize I love a portrait layout. It just gives you so much more vertical context than a landscape layout. You can get a real sense of the sky and the time of day, especially at Long Beach, where highrise buildings provide the perfect backdrop for an urban course.

Over at the Inside Clip 1, I also ran into Larry Chen, ace photographer and friend of The Drive. Chen saw what I was doing and wanted to get in on the action, too. And because he is far wiser than me, he immediately saw the permanent ISO 800 as an issue and popped the polarizer off his own camera to address it.

He also tried out a landscape pan, which I hadn’t done yet. 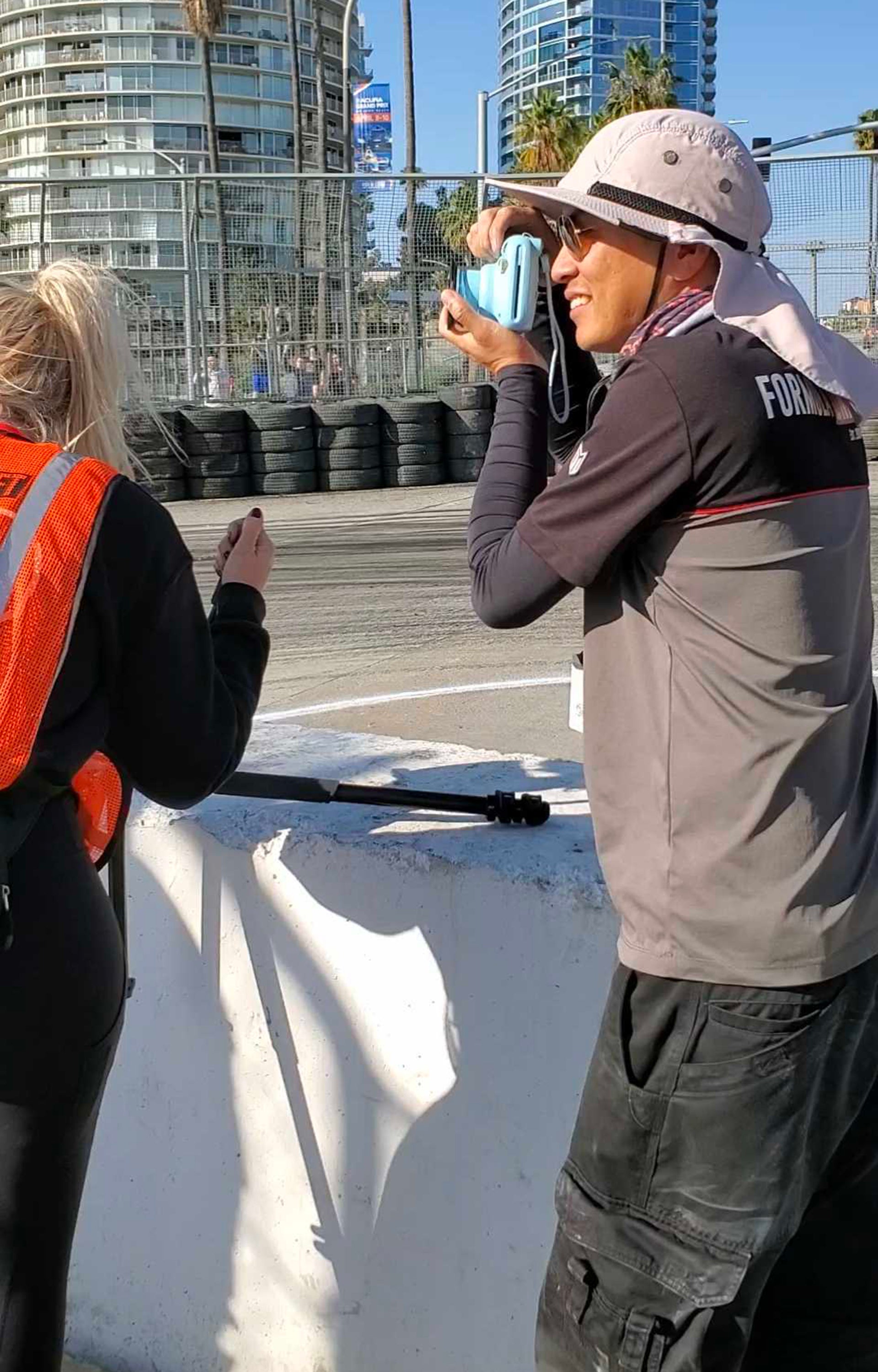 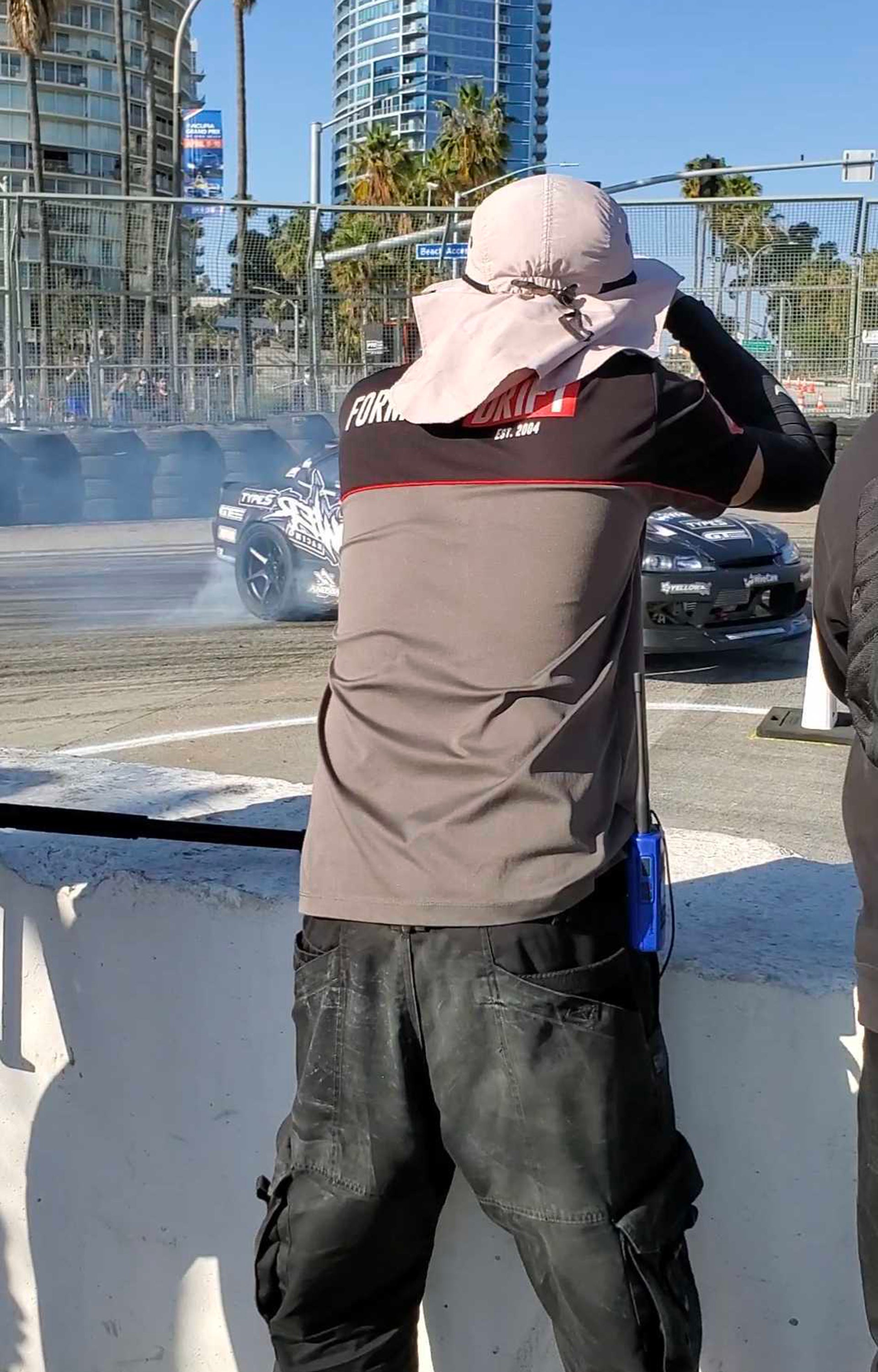 It turned out more than alright. We were thrilled. 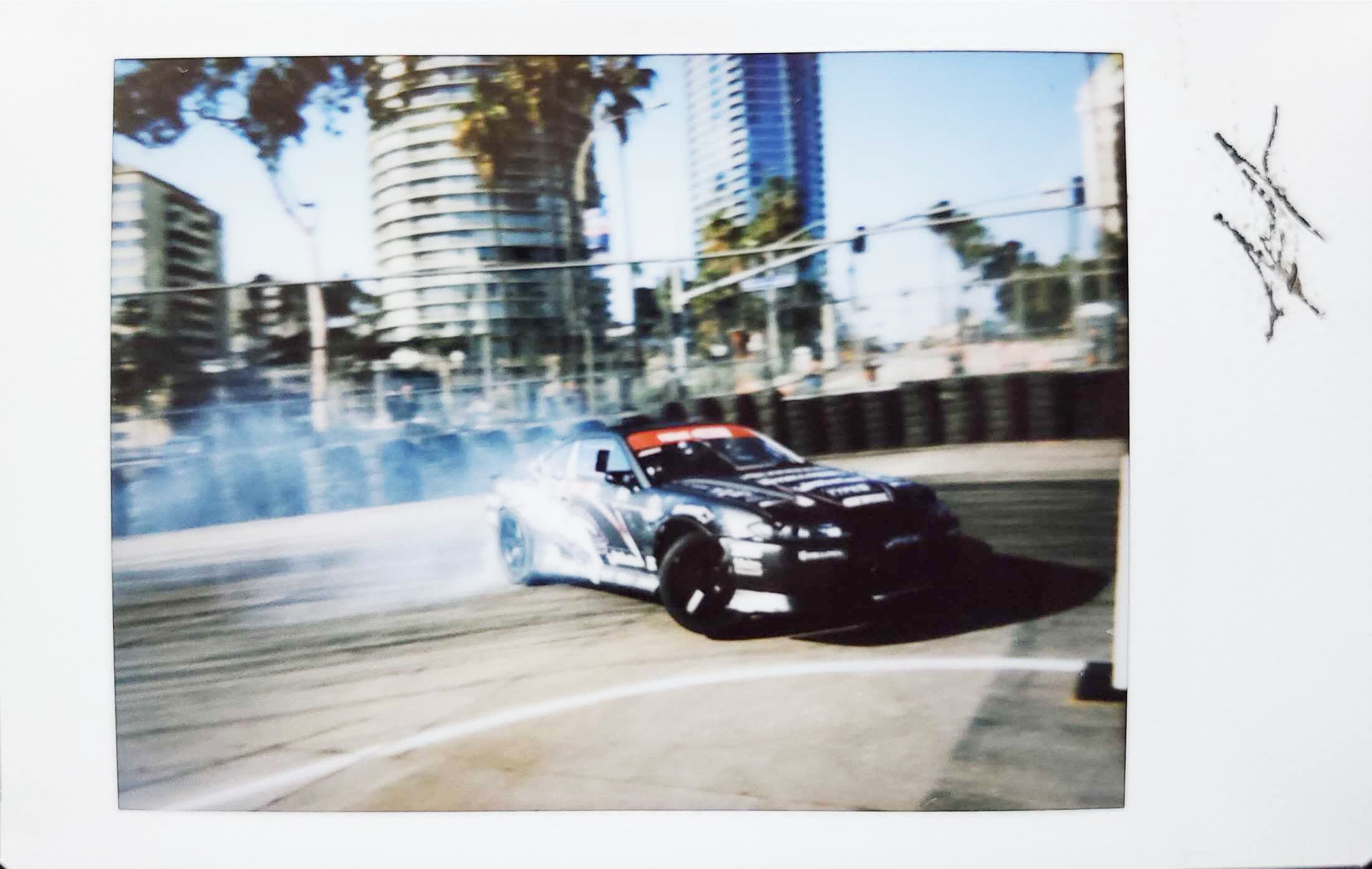 My attempt was, uh, less than stellar. Is that my finger or a pole in the corner? Only God will know. 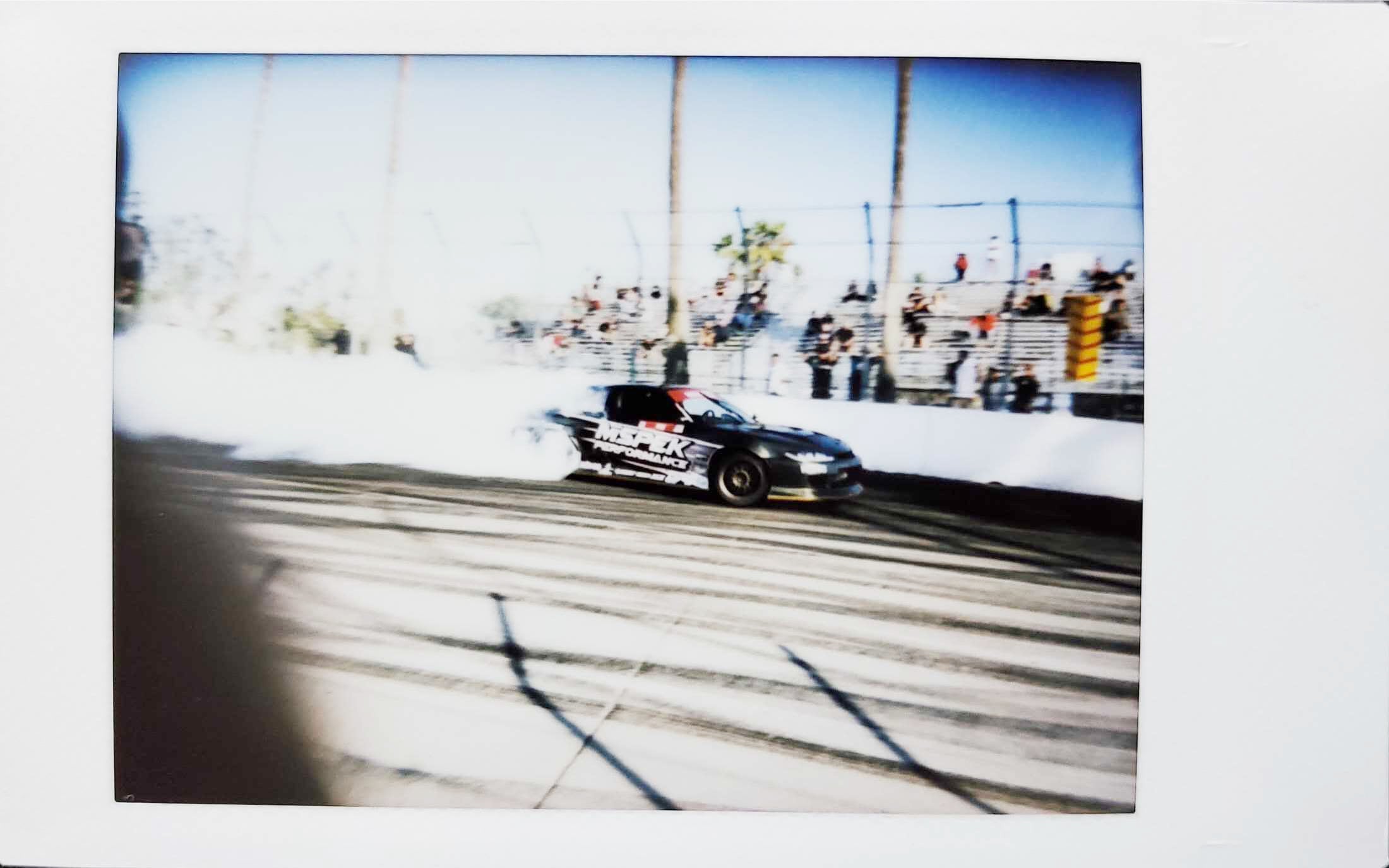 But I was stoked, man! Who knew a silly, cheap little camera could bring me so much joy? There was also something intangibly special about getting to hold a physical picture moments after I’d taken it. Waiting for the film to develop gave the whole experience a sense of anticipation. Shooting digital means instant gratification (for the most part), but the Instax forced me to slow my game down, to plan, to really think about what I was aiming my camera at.

The last shot was my favorite by far. I wanted Chris Forsberg and the new Nissan Z, and I wanted the round building in the background. I got what I wanted. 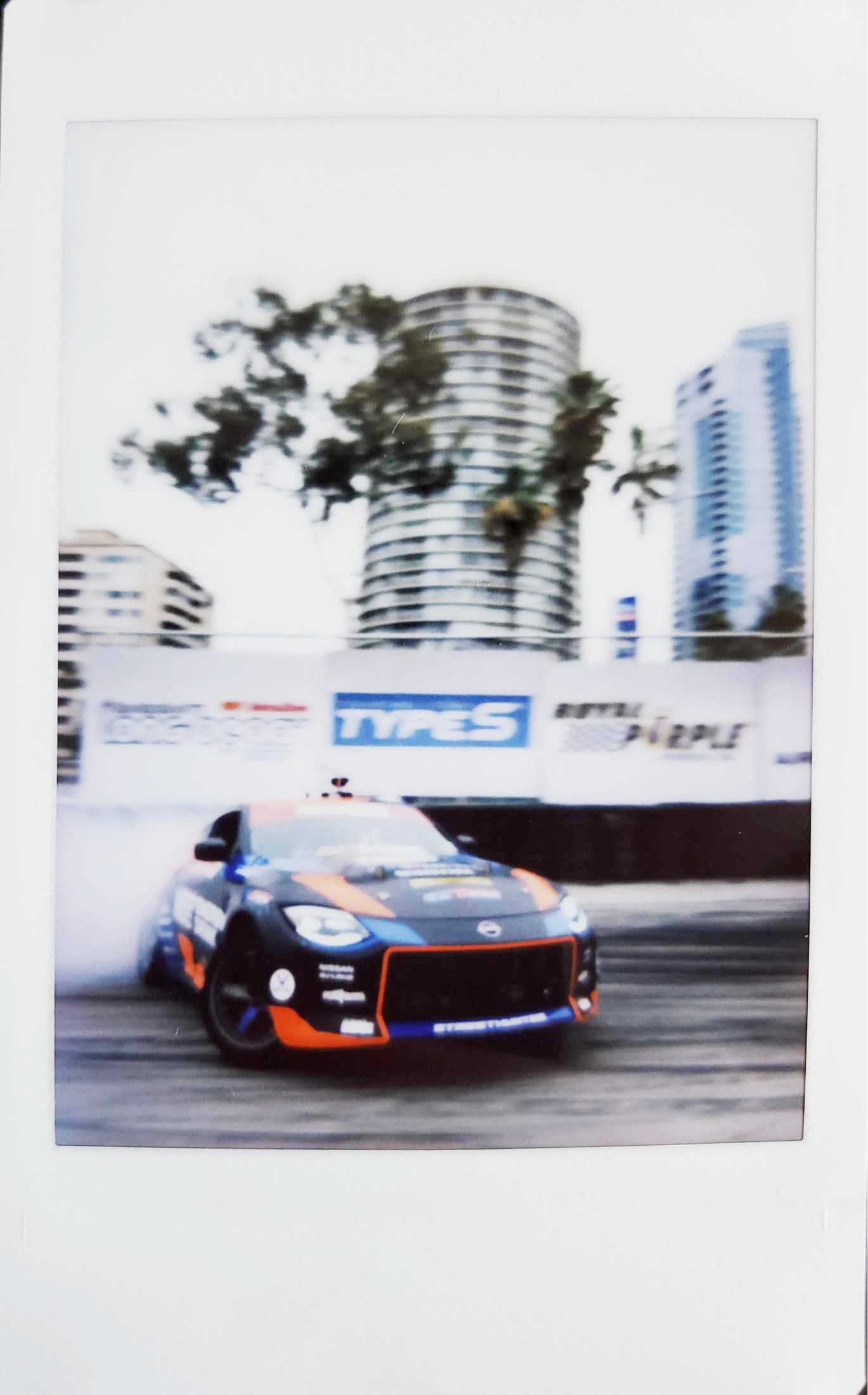 I realize that the photos appear a little darker than they really are to you all through the screen after I scanned them. But that’s just another part of the charm; the photos are most impactful in person. They’re not for mass, online sharing. They’re going into a photo album that I can show my friends in person. It’s a very sweet thing.

I’m glad I tried this out at Long Beach, which is a very tight and close-up course to shoot. The other tracks in the season don’t really offer this kind of intimacy, but it’s where the Instax shone the brightest. I know I’m very late to the shooting-on-film party, but I definitely do understand the appeal now. Even if I was doing it on a camera I’m pretty sure is meant for children. But I’m never getting rid of this thing.