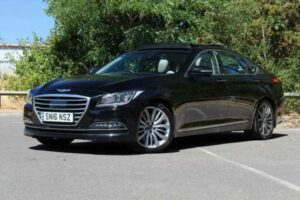 Hyundai has only just figured out what it’s doing with Genesis. You’ll likely recall that the name first cropped on the Genesis Coupe, a very un-Hyundai two-door sports car that not only looked the part, but also came bundled with a 353hp V6. At the same time (you might not recall) the Korean carmaker also used the Genesis name for a series of luxury saloon cars that served as Hyundai’s own-brand version of Lexus and Infiniti.

Of course, now the Genesis name has officially arrived in Europe as its own fully-fledged brand. And, for the most part, the newbie has some decent cars in its line-up; notably the G80 saloon and GV80 SUV for offering genuinely luxury at a not ridiculous price. Even if they do look like Bentley knockoffs. But these are very much the second coming. The Hyundai Genesis V6 was first.

At first glance, it’s difficult to tell that the Genesis V6 is in fact a Hyundai. Well, unless you look at the back. The markings at the front, as well as inside, are the now-recognisable Genesis wings, though bizarrely the usual Hyundai badges take centre stage at the rear of the car. Other tell-tale signs are the taillights, which – though different – look similar to those on the Elantra. It also doesn’t share any of its underpinnings with the company’s hatches or saloons, with Hyundai even going to the trouble of tailoring the set-up to UK roads. Couple that with a 3.8-litre V6 producing a not insignificant 315hp (to the rear wheels!) and you’ve got the key ingredients of a Lexus-rivalling luxury saloon. Right?

Sort of. True, interior quality was a vast improvement from what we’d come to expect from Hyundai at the time. Remember, it wasn’t that long ago when Hyundai interiors were a sea of cheap, grey plastics that made cabins look as though they were draped in a thin layer of fog. Things were jazzed up a fair bit with the Genesis V6, including genuine leather upholstery and, if you fancied it, wood trim on the dash and door inserts. There’s even an analogue clock in the middle of the dashboard. Ultimately, though, it wasn’t enough to disguise the fact that the Genesis V6 was a Hyundai at heart. Some journalists were unconvinced by the quality of the interior plastics, while others suggested that, even with the adaptive dampers in their stiffest setting, the ride and handling remained a bit too pillowy for European tastes.

It also didn’t help that the Genesis V6 commanded serious money. With a base price of £48,000, the flagship went up against the BMW 5 Series, Mercedes-Benz E-Class and Lexus GS, all of which were arguably better all-round executive saloons. Little wonder, then, that Hyundai struggled to shift them. HowManyLeft claims there are only 45 examples left on the road today, although that’s only three cars down from the model’s peak in 2018. This makes them a pretty rare sight in the UK, and an unknown quantity to pretty much everyone outside the Hyundai dealer network. Accordingly, just a few years from launch, they have become pleasingly affordable.

This 2016 car comes loaded everything Hyundai had to offer at the time, including electric reclining rear seats, a head-up display for the driver, sun blinds and an infotainment system with Apple CarPlay and Android Auto support – not all that common on cars of this era. What’s more, Hyundai is among the very best for reliability, so this Genesis V6 is barely run in at 62,000 miles. Sure, you can pick up the odd 5 Series and E-Class for similar money, but good luck finding one that’s as loaded – or as punchy – as this surprisingly swish saloon.