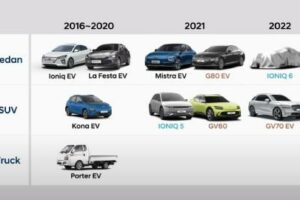 11 EVs from Hyundai and 6 from its luxury brand, Genesis.

Hyundai recently unveiled its future plans for electrification, while also announcing an investment of US$ 16.15 billion. As part of its push towards electrification, the company stated that it plans to introduce 17 new electric vehicles by 2030. This includes 11 EVs from Hyundai and 6 from its luxury brand, Genesis.

Of the 11 Hyundai EVs planned, three will be sedans, 6 will be SUVs, one LCV and one ‘new type model’. Genesis, on the other hand, is said to launch 2 cars and 4 SUVs.

Hyundai Motor Group also announced the debut of a new EV platform in 2025. This platform is said to be an evolution of the E-GMP and will be called ‘Integrated Modular Architecture’ and will underpin the brand’s future passenger and commercial vehicles. The new platform is also said to vastly improve the range of the EVs (Hyundai claims 50% more than the Ioniq 5), while the standardisation of the architecture should help bring down development costs.

The company also plans to sell 1.87 million EVs by 2030, equivalent to a 7 per cent market share.

Hyundai also stated that it will start rolling out over-the-air (OTA) software updates from late-2022. with all models from 2025 getting the OTA capabilities. Also, the Genesis G90 will be the first model in the Hyundai Group to receive Level 3 ADAS, with the feature expected to debut by late-2022.