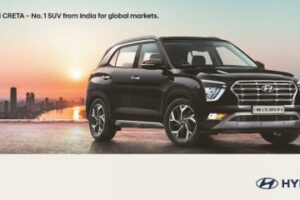 Hyundai exported 32,799 units of the Creta in CY2021, the highest among all brands in India.

Hyundai also shipped 7,698 units of the Venue and 1,741 units of the Creta Grand, which is sold in India as the Alcazar. Overall, the Korean carmaker exported 42,238 SUVs during CY2021.

Hyundai is expected to introduce the Creta facelift in India later this year. It comes with a redesigned front fascia featuring a large ‘Parametric Jewel’ grille with integrated LED daytime running lights. The SUV also gets a redesigned tailgate with boomerang-shaped LED taillights.

In India, the Creta facelift is expected to be offered with the same set of engines as the current model.