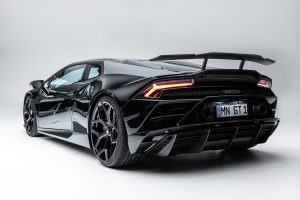 Novitec hasn’t let rave reviews for the Lamborghini Huracán Evo RWD stop it from tinkering, as evidenced by its latest range of performance enhancing upgrades. The German tuner has produced an uprated exhaust and suspension package, to be offered alongside new wheels for the highly rated V10 machine. Novitec claims the modifications will unlock more excitement and character from the package, while also trimming the car’s overall weight. In a variant that’s already 33kg lighter than the all-wheel drive version, it feels appropriate.

That said, even in the more ‘agile’ rear-drive machine, the party piece remains that 5.2-litre engine. Novitec has carried over its exhaust system from the normal Huracán to give this RWD version the same enhanced vocals, with buyers able to choose between a stainless steel or lighter Inconel system. As you’d expect, both versions are freer flowing than the OEM pipework (presumably they retain a particulate filter, as per EU regs) and they come with thermal insulation, although Novitec doesn’t make any claims for extra engine performance. No biggie; it’s not like the standard setup has ever felt short on power.

To extract more from the Huracán’s factory-fit brakes (Lambo offers both cast iron and carbon ceramic options), Novitec has attempted to up the airflow pressure onto the calipers with reshaped intakes at the front and rear. It’s even added a new front splitter to divert air across the front of the car into the openings, and a larger diffuser for more downforce, something that affirms this isn’t just a project intended for attention seeking. It’s hammered home by the offer of aluminium coilover suspension, developed with KW and featuring ‘solid-piston’ adjustable (through 13 stages) damping that was apparently originally developed for GT3 racing.

There are, of course, aesthetic mods to come with that lot, if you want them, including a set of Vossen 20- and 21-inch wheels, each an inch larger than the standard factory rims. They're in addition to a fixed rear wing, carbonfibre body panels and Alcantara interior trimmings, for the full motorsport look. While the pictured demonstrator bears all of the upgrades, customers can pick and choose between them, although pricing isn’t out yet. Assuming the numbers aren’t outrageously large, the prospect of an even better sounding Huracan Evo RWD with greater brake cooling is an attractive one, particularly with a new track day season surely not that far off. Just need a donor car first…