Home » Auto News » How to Make Custom Headers: When Off-the-Shelf Parts Won’t Do

How to Make Custom Headers: When Off-the-Shelf Parts Won’t Do 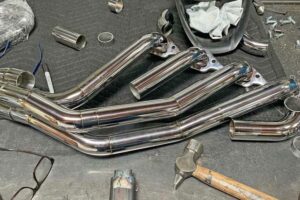 There are hundreds of off-the-shelf headers in the aftermarket, but every once in a while a project comes along that needs a special, hand built set. Case in point is Larry Jacinto’s 750-hp, 454-powered 1971 El Camino being built at the Veazie Bros. hot rod shop in Pomona, California. There was just nothing available over the counter that cleared the steering shaft and other components, and nothing that really had the look they wanted. The only option left was a set of custom-built, stainless-steel headers.

Evin and Justin Veazie reached out to Jeff Johnson of Accurate Mobile Welding in Upland, California. Jeff, a certified and licensed welder, can and does handle any welding task. He has been doing this for more than 32 years, and his specialty is building beautiful custom headers.

After discussions with Jeff, the Veazies ordered a stash of header parts from SPD Exhaust in Rancho Cordova, California. The list included header flanges with 4.84-inch bore centers (flanges with a 5-inch bore centers are also available), a stash of 16-gauge, 1 ⅞-inch diameter U-bends, a couple of collectors and a couple of VBK flanges—the latter offer V-band clamps for maximum sealing. Before any work was done, the parts were sent out for polishing.

Jeff arrived with the smallest, emptiest bag of tools I have ever seen—just a hammer, a pipe cutter, and a tape measure. Notwithstanding his small bag of tricks, Jeff does amazing work. Despite a false start trying to beat the pipes into a D-shape to fit the flanges, Jeff was soon on a roll. Within just four days, he pretty much had the headers completely fabbed-up, and they were sent out for final polishing.

After the polishing was complete, Jeff moved on to the exhaust system. It was made from 3-inch, 304 stainless tubing. The 304 alloy was chosen because it is more resistant to corrosion than, say, 303 stainless. Obviously, with the time spent shuttling parts back and forth to the polisher, the whole process took more than four days, but that was the actual fab time.

With the 750-hp, aluminum-headed 454 built by Ray Zeller installed, space for headers had shrunk due to the placement of the steering shaft, master cylinder, and oil filter. On the passenger side it was the same story, with the APS starter motor and engine oil dipstick in the way. To begin the header-building process, a stash of exhaust items including U-bends, collectors, header flanges, and VKB flanges were ordered from SPD Exhaust and promptly sent out for pre-polishing. These parts would be polished again after assembly.

Unexpectedly, Jeff began by positioning the collectors using jack stands. There wasn’t much room, so their placement was critical. Protective material was used to prevent the collectors from being scratched. You can see clearly how tight the space was, given the location of the steering shaft and the oil filter, so before he did anything else, Jeff positioned the driver-side collectors and contemplated the tubing layout. The passenger side was only somewhat better, even with a mini-starter and the dipstick to contend with. Jeff wanted as close to a mirror image as possible, so careful planning was necessary.

Jeff next installed the polished stainless D-port header flanges. Something important to consider here is the flange bolts. You must, of course, be able to reach and get a wrench to them. With the flange bolted on, Jeff held up a couple of tubes just to see how things might look. Experience and having an eye for this is how you get it right with minimal reworking and minimal scrap. Jeff began by forming the ends of the 304 stainless pipes into the D-shape of the hole in the header flange, but that proved to be very difficult. There had to be an easier solution.

Rather than beat the tube into submission, Jeff decided to cut small slices of tube that could be more easily formed into the D shape. This proved to be the simple answer to shaping the ends of the tubes. Here you can see how the small slice of pipe was formed into a D and welded to the end of the pipe. When it’s all welded and polished the joint will be invisible, and this little trick saved hours of beating.

Eventually, Jeff was happy with the first piece of pipe that angled down and back toward the block and behind the steering shaft. It proved to be a good place to start. With the layout coming together, he was able to tack on lengths of pipe to take the first tube down to the collector. It was a lot of trial and error and trial fitting to get it right. Patience is the key.

At the other end, you can see how the first pipe aligned with the collector and was tacked into position. At this point, everything was only tack-welded because adjustments were necessary as the work progressed. The same process was then repeated on the passenger side. Notice how Jeff used lengths of pipe to effect his mockup before cutting and tacking each section into position. Once he was happy with the way the pipe flowed down to the collector, he generously tacked all the pieces of pipe together. These pipes were coming on and off, and needed not to fall apart. With the first pipe on both sides more or less in the correct position, Jeff began on the second pipe of the driver’s side. Likewise on the passenger side, Jeff moved his attention rearward and positioned pipes two and three. You can see that this is all trial and error.

On the bench you can see how the jigsaw puzzle comes together, and after an enormous amount of jiggery-pokery, trial-fitting, and tacking, Jeff had the makings of the passenger-side header. Sure, there are plenty of cuts and shuts, but when it’s all welded and polished it’ll be a smooth set of pipes. Of course, as he moved along, Jeff had to constantly check that the headers could actually be installed and removed. It’s not much good to have them finished only to find out they can’t be installed. With the headers on the engine, Jeff found that the first three pipes on the driver’s side were pretty well set, and only the fourth pipe still needed work. It’s certainly a jigsaw to make 12-feet of pipe fit in such a small space.

For final welding, Jeff back-purged the pipe, filled it with Argon to prevent contamination of the weld from the inside. The steel wool regulated how fast the Argon escaped. After the finish welding was complete, Jeff cleaned up all the welds and repaired any little blemishes he may have missed. Part of that cleanup process was to fit the primary tube to the exact shape of the flange. This was an easier task now that the pipe had been welded on the outside. After forming the tubes to fit the flange, Jeff neatly welded them together on the inside. Note: This is prior to any clean up of the flange. Finally, the headers were sent out for one last polishing.

The full system, complete with X-pipe, is still in process, under Larry Jacinto’s ’71 El Camino at the Veazie Bros. hot rod shop. Viewed from underneath, you can see just how tight the space was that Jeff had to work within. Nevertheless, he made a beautiful job of the installation. If you’re looking for a set of stunning, one-off headers, this might just be the way to go.