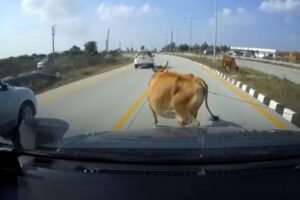 In India, there is a very high risk of encountering domesticated animals when driving on the highway and on city streets too.

BHPian SS-Traveller recently shared this with other enthusiasts.

Our roads are riddled with not just potholes and sudden obstructions, but animals of many sizes. The presence of animals on corridors where vehicles travel at high speed is not uncommon in many parts of the world. Kangaroo strikes in Australia, and moose & deer strikes in North America and Canada are common. These are wild animals that frequent uninhabited areas. However, in India, the greater risk is that of hitting a domesticated animal, such as a cow or buffalo, goat, sheep, or a dog – both on the highways, as well as inside our cities.

The video below shows just a few of my personal encounters with animals on the road in the capital city of India (and the NCR region), over just a few weeks before writing this: So what are the animals you are likely to collide with, and what are the strategies to follow, to avoid crashing into animals?

Recognize the types of animals

The slow-moving animal that keeps moving forward relentlessly: Cows and buffaloes will often just walk ahead at a leisurely pace, unmindful of a 2-tonne mass of steel headed straight at them. There are only two options to avoid a collision – brake and stop before you hit them, or swerve and pass behind them. More discussion about cattle on our roads can be found here (Cattle – The real menace on Indian highways).

The quick-footed confused animal: Sheep, goats, pigs and dogs are frequently confused while crossing the road, and can suddenly turn back, or simply run on ahead. The only way to prevent a collision is to drive slowly in an area where these animals are known to stray onto the road without notice and stop for them (if you can). I could not, but then this was on a 6-lane expressway, late in the night, and I wasn’t expecting a stray dog to run out from my right at that hour. The intelligent animal: Monkeys and cats are very aware of the danger in their surroundings, and are usually quick enough to get out of harm’s way (see the second video in the previous post). I am yet to see a dead monkey or cat on the road that has been run over by a car.

The angry, attacking (sometimes wild) animal: Bulls (especially those that are armed with huge horns) are known to attack cars, even when you’ve completely stopped. You can get swiped by those horns when passing too close to a bull – leave enough space as you pass the animal. Wild animals such as elephants and nilgai frequently charge at cars even when they are a safe distance away. Here’s a video of a nilgai that headbutted my car, that too in the heart of south Delhi! 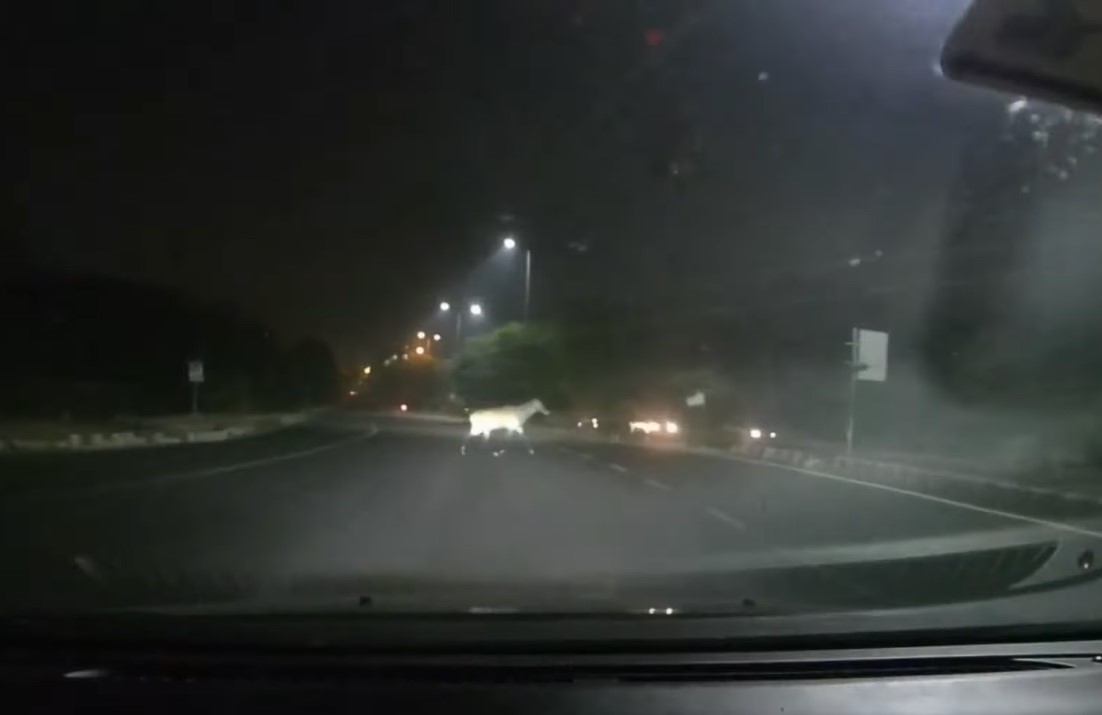 The very small animal (or bird) that will generally not damage your car: When I was undergoing low-risk driver training, I braked for a plump little kookaburra on a narrow highway doing 60 km/h – and got reprimanded. You don’t brake for a ‘Burra, I was sternly told. The risk of someone rear-ending you is higher than any damage by that little thing. From then on, I don’t brake for crows or chickens or snakes on the road.

Be alert: Look out for that brake light coming on suddenly. If you are thinking the driver ahead is an idiot for braking on an empty stretch when he should be overtaking, you might be mistaken – he’s probably spotted something that is hidden from your line of sight. As in the case of the tractor swerving to the left (in the second video in the first post), look out for those telltale warning signs.

Be ready to brake hard: Often, an animal can intrude into your lane without notice, and braking hard as well as steering away from the animal can be the difference between a crash and a near-miss.

Keep adequate CAS: Do not follow the vehicle ahead too closely. CAS of 2-3 seconds is the least you need to maintain, to give you a cushion of space in case something intrudes into the front of your car.

Driveaway: Rarely, the only option to avoid a collision with a charging animal is to drive away as fast as you can. This may well be in reverse! Watch… Analysis of some crashes with animals What happened: The bike hit a goat while overtaking another bike at high speed.

Could the crash be avoided? Riding too fast, without enough CAS at the time of overtaking. The chances of avoiding a collision in this situation are low. In an area known to have stray goats, sheep and dogs on the road (i.e. riding/driving through narrow village roads with habitation and agricultural fields on both sides), it is necessary to drive slow and overtake carefully. What happened: 2 cars overtook a third car when a cow strayed into the right lane. The first overtaking car swerved to avoid the cow, while the second car crashed into the cow.

Could the crash be avoided? Yes. The CAS was insufficient (less than 1 second, even at the beginning of the video), with the gap closing as the cars started overtaking. At 0:10, the XUV500 starts to swerve left sharply to avoid the cow in its path, and the impact with the cow happens less than 2 seconds after that. Had the CAS been 3 seconds or more (assuming a speed of 80 km/h at that time) and if the driver was alert to the possibility of animals on the road, the Innova could have stopped (there was no way to swerve behind the cow and pass). What happened: A car overtook another car when a herd of buffaloes strayed into the right lane from bushes on the median.

Could the crash be avoided? Perhaps yes. At 0:11, there are stray cows seen on the right of the road, and the driver moved to the centre of the carriageway. Keeping to the centre and driving a little more slowly is the safest option, with overtaking manoeuvres to be only performed when there is a clear line of sight over the central verge, without overgrown bushes. 15 seconds after noticing the stray cows, the car crashes (at 0:36).