How One Old Car Can Completely Change Your Life

I have an affinity for ‘50s American iron—namely, of the Ford variety. While probably not typical for someone born the year Nirvana’s Nevermind hit shelves, it is nonetheless my reality. And while I can point to the time I spent working with my dad in the garage, chasing car parts at swap meets, and just being fascinated with the aesthetics of absurdly designed postwar cars, I lay the blame for my affinity for vintage tin on one car.

You see, while I was busy being born, my father was piecing together a 1954 Ford sedan. Like any sensible boomer, he started with the intention of capturing the nostalgia he couldn’t afford in his high school days. With ‘50s cars being relatively plentiful and affordable, our aging hero spent considerable time and money converting this two-door sedan into a convertible. And in case you’re wondering: Yes, he had three convertible parts cars he could have started with instead of powering through with this interesting solution to a closed-car problem. Alas, hindsight isn’t helpful.

My dad finished the car near the end of 1993 and sold it around 1994, which, for those at home doing the math, put me at roughly three years old, making memories of dad’s 1954 Ford faux-Sunliner foggy at best. I’m sure there’s a child psychologist who will point to the way my brain absorbed those preconscious memories and rendered them into my conscious mind, and there is probably something to that, but it’s more likely my love for that car and its ilk grew over time, fed by a lifelong familiarity with photos and old home movies featuring my family and the car.

As tends to happen when cars trade hands, dad’s ‘54 Ford disappeared after he sold it. Despite going to custom car shows all around the Midwest my entire life, I somehow never stumbled onto it. And, more importantly, dad moved on. Other cars took its place, and more cars replaced those. After years of looking at the handful of pictures of dad’s car, I eventually bought my own 1954 Ford—a hardtop—and performed many of the same modifications (short of shearing off the roof). 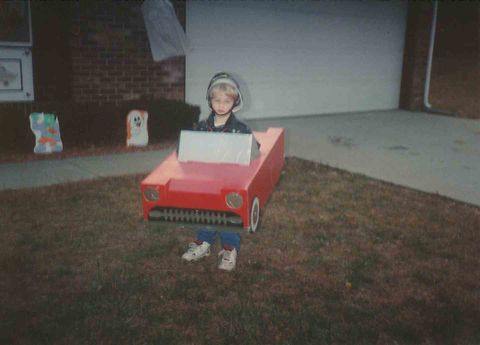 Anytime I saw a red 1954 Ford convertible with a 1954 Chevrolet grille, I would always think it could be dad’s car. And I’ve always been wrong. But as I was looking through pictures of last week’s Custom Car Revival, a car show dedicated exclusively to traditionally styled custom cars, I saw what had to be my father’s old machine. The next day, dad confirmed my suspicions. I had to go see it.

As irrational as it might sound, I hopped in a 2021 Hyundai Santa Fe Calligraphy (you’ll hear about on an upcoming episode of Quick Spin, stay tuned!) and made a quick, unplanned trip to Indianapolis to see dad’s old car. It was only a handful of miles from where it was originally built, and it was exactly how I remembered it—or, at least how it was preserved in the pictures I grew up looking at.

Even though I’ve seen incredible cars during my tenure at Autoweek at auctions, press reveals, and events like Pebble Beach, this 1954 Ford is the most important car in my life. The cars that followed it help foster my complicated relationship with dad, but this car imprinted on me, and at such an early age, that I don’t know if I’ll ever be able to shake my love for ‘50s iron. 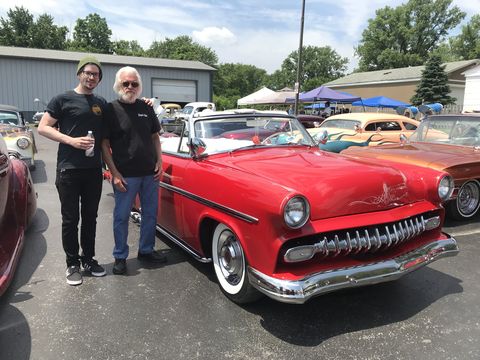 What was almost as important as seeing dad’s first custom creation was getting to see and experience the car with him, and as an adult. It might be sappy, but walking around this car with my dad was special in a way that honestly makes little sense. After all, it’s just an old car.

Even though this car won’t make the featured page at a major auction, or show in a special class at Pebble Beach, the personal connection it fostered is something I’m sure everyone who made it this far can understand. This experience worked as a reminder that any car can become significant to someone, and create lifelong memories that can shift the trajectory of a life. And, if you’re fortunate enough to share those memories with a parent, it makes it even more worthwhile.

Do you have any special cars, or memories with cars? Let us know about them in the comments below.