Home » Auto News » How Land Rover is Gunning for Jeep

How Land Rover is Gunning for Jeep 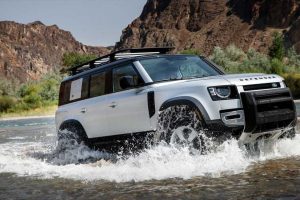 It’s hard to imagine a world where Jeep stopped making the Wrangler, or Toyota gave up on the tougher versions of the Land Cruiser. Yet Land Rover denied U.S. buyers its most iconic model – the original Defender – for more than two decades.

That’s something the arrival of the new version is making amends for, with vehicle line director Nick Collins telling us the American market was at the forefront of the planning team’s minds during the development process. For example we are most of the reason gasoline engines have been fitted, Europeans still overwhelmingly picking diesel in this segment.

But at the launch of the short-wheelbase Defender 90, which is even more accomplished off the beaten track than the 110, Collins also admitted the Wrangler is the most obvious key rival in the U.S.

“We think the Defender is in a class of its own, but clearly it will get driven against the Wrangler, and also the G-Wagen and in some parts of the world the Toyota Prado [the biggest of the Land Cruiser clan], he said, “We had all those competitors here and we drove them all, to understand their strengths and weaknesses. Clearly in the U.S. we have a degree of overlap with the Wrangler, it starts with an aggressive entry price but when you add spec it soon gets into the same territory (a Defender starts at $46,100 and a Wrangler at $28,295). But spec-for-spec the Defender is an incredibly high value proposition.”

While Land Rover’s products have traditionally been designed to conquer the UK’s typical off-road environment – sodden dirt – the new Defender has been engineered to master the more technical U.S. requirements of rocky trails as well.

“It’s a different kind of environment,” Collins says, “a different kind of off-roading where articulation is particularly important for climbing over rocks, and where very fine throttle control and overall ground clearance really matter as well as approach and departure angles… We’ve deliberately gone for class-leading geometry and ground clearance to get over obstacles, because that’s what the guys who hit the trails expect.”

Land Rover’s engineering team are also fascinated by the ways that early U.S. buyers have been tweaking and tuning their Defenders, seeing it as a validation of the regard the car is held in. “It’s cool to see customers modifying their cars,” Collins says, “one of the things we definitely wanted to do was to create a car you can personalize or accessorize – raise the suspension or put different tires on.”

Like many tribal battles the question of Defender versus Wrangler is one that will likely be called by tribal loyalties as much as empirical evidence. But that Land Rover is prepared to explicitly call out the Wrangler as the Defender’s core rival – on this side of the Atlantic at least – is a clash that may well ultimately strengthen both protagonists.