Home » Auto News » How Jeep sold me a Compass, after I had booked the Harrier

How Jeep sold me a Compass, after I had booked the Harrier 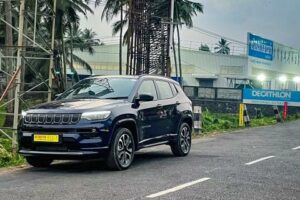 I had booked the Tata Harrier initially as a replacement for my 2007 Honda City.

Thanks to Kalpak Arware for sending this in. Heartfelt gratitude for sharing it with other enthusiasts via this Team-BHP share page!

Keep dreaming positively and so shall happen!

The year 2017 was when the Jeep Compass was put on sale in India. Just fell in love with its looks. When I saw it in person, it was the car I wanted to own. The pricing of the car made me only dream of owning it someday….

I had been owning Honda City since 2007. A 2nd generation Honda City from 2007 to 2012 a “dolphin-shaped” as it was known as. Thereafter a 3rd generation one from 2012 to 2019. Both put together I must have covered 3.5 lakh km. I had pleasant ownership with these beautiful cars. Never did they trouble me even once.

Both were huge luggage carriers. Could accommodate loads and loads of it and its engine smooth as butter. The only grouse was its low ground clearance. Comes 2019 some unfortunate events led to my wifey getting diagnosed with a Cervical Herniation (disinform in the spinal cord in the neck area). And her travelling now had to be more comfortable.

“Khujli” for the new car started. Having lived with sedans all this while, got into the market to explore new cars and this time it had to be an SUV, a diesel and a proper 5 seater. A few SUVs were launched during the period. So I was excited to explore them.

In the mid of Aug 2019, some upgrades/ changes in my professional life coupled with the above-mentioned events made me think of getting this car seriously. Also read that, the initial niggles were ironed out in models manufactured after July – Aug 2019. Had a couple of more test drives with wifey and we decided to go ahead with the booking. It was a certain stretch in the budget for me. Again sweet news came in the State Government had slashed 50% road tax on all the cars being bought & registered before 31st Dec 2019.

On 21st September 2019, being my daughter’s birthday, I booked the XZ top-end model in thermisto gold colour which was available during that time. Handed over a cheque for the booking amount. The only request I had for the SE was that I wanted a model that was manufactured only after July 2019 and he had to assure me that. I wanted to take the delivery during Diwali time on 25th October 2019.

Started following up with the SE. The SE was very cooperative and during each visit attended to us very gladly from day one. However, I found that his higher-ups were not that accommodating and kept delaying the updates and commitments on my requirement. Spoke to the manager who again was like Sir, nothing in our hands we have to take the car allotted by the factory and so on……

AND then enters the JEEP Compass again.

28th September 2019, I along with my family were on a leisure trip around Panjim and happened to see the Jeep Showroom on the way. And just out of curiosity happened to enter the showroom. Already informed them that I had already booked a Harrier and was in the showroom just to have a look and if possible a test drive. I knew that with the budget I have I could just be able to get my hands on the Sports version which was a base version of Jeep. It was a bare-bones car with no great features.

The team there was more than happy to offer a test drive. The test drive car was a top-spec model with a sunroof and the interiors were cool and uber. The size was smaller than the Harrier but looks-wise nothing short. It was like seeing your ex-lover once again and the feeling that you get. Took the car for a spin. What a difference! The same engine as Harrier, but what pulls with 171 BHP to play with, superb ride and handling. A very silent cabin indeed. Body roll was controlled and stability was confidence-inspiring even at high speeds. Felt as if I was driving a sedan. The test drive was taken as per my driving capabilities. Was mighty impressed. Though the luggage space seemed very less.

The team then suggested that we once again go for a test drive, this time with their expert driver, to actually get to know the real capabilities of the car and with nothing else to do we were ok with it. The test drive that we were taken on included;

All this and we were back to the showroom with a thousand-watt smile on my face. My one question to the manager there – “Where the hell did you get this driver from? Pat came the reply, Sir, “it is not the driver but the car who handled you all”. The team at the Jeep showroom was exceptional. They provided me with all the info about the Jeep Compass. Never did they bad mouth the Harrier and always said it was a good product.

All the above gave me a totally new perspective on how a test drive of a car should be so that its capabilities stand out as compared to the other cars.

Then came the actual phase of “Kashmakash”. Which car? Jeep is a known and established brand. Mind started playing games. The heart was still with Harrier. However, a new TATA product, unknown service records and niggles to deal with.

The budget that I had would provide me only the bare bone base Sport version of Jeep 19.5 lakhs on the road that too a petrol variant. Whereas, I was getting top-spec Harrier for almost the same on-road price. The diesel sport version was 21.5 lakhs on the road which was way out of budget. The next version which had relatively better features was Longitude (O) model 24.5 lakhs. A discount of INR 50,000 was on offer. However, way out of budget. Wifey was in love with the Jeep. It somehow gave a feeling of premium-ness. Left the showroom with a heavy heart.

Come 30th September 2019, a team from Jeep dealer arrives at my workplace. They had automatic petrol with them. Test drove and was highly disappointed with the engine. No zip and energy at all. After having driven the 2.0 diesel, the petrol AT was a big NO-NO. I told the team that, for the price I am paying I don’t get any features in the Sport version, whereas I was getting top-spec Harrier. The team said they would get back to me and left. In the meanwhile, there was no news coming forth from the Tata dealer. Surprisingly they hadn’t even deposited my booking cheque.

On 3rd October 2019, the Jeep team arrives again at the workplace. Sir, we have an offer for you. A Magnesio Grey colour Longitude (O) with a discount of 2 lakhs. They disclosed that the model was June 2019 manufactured. I could not believe my ears and they explained the calculations.

The car would be made available to me by the 22nd of October 2019 itself.

Spoke to a couple of friends, family members and as I expected all voted for the Jeep Compass. Made up my mind and called up the Tata dealer and told them about my decision to cancel the booking. They happily give me back the booking cheque which they had not deposited. Probably they knew they would not be able to honour my requirements. What a shame….!

I had already initiated the loan process with the bank for Harrier. In the meanwhile, the dealer for Jeep agreed on the price I had asked for in exchange for my Honda City. The same was adjusted against my down payment for Jeep Compass. Informed the bank about the change in the car from Harrier to Jeep Compass. The same was done by the bank in no time and informed me about the sanction of the loan amount.

The booking of Jeep Compass was done on 7th October 2019. On 15th October 2019 received details of the car being despatched from the factory and the VIN number was provided. The car arrived as scheduled on 22nd October 2019. Immediately visited the yard and inspected the car, PDI was done and provided go-ahead for registration.

The loan amount was dispersed and registration is done and the car was ready to be delivered on the 25th of October 2019. The way the team of this Jeep dealer handled the whole situation and sold to me the Jeep Compass shows how a professional approach can do wonders in selling a good product, while on the other side, a bunch of unenthusiastic teams can ruin a good product.

And here we are taking delivery of our Love the Jeep Compass!