Home » Auto News » How I decided to restore my 2005 Toyota Corolla, instead of selling it

How I decided to restore my 2005 Toyota Corolla, instead of selling it 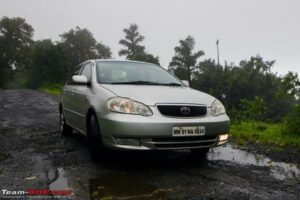 Mark my words, no car from today will offer the durability and reliability that generations of Toyotas and sedans in general, would offer.

Back in the Game!

While I am otherwise active on the forum, I realised that this thread has been inactive for over a year. To start off with, until now, there weren’t any noteworthy updates with regard to the Corolla. The car has hardly done south of 3000 km in the past year and a half due to the outbreak of the pandemic and has been constricted to 5-10km usage within the city limits only. Apart from a trip to Lonavala in January 2021.

Ever since the pandemic began to calm down and things became normal again, it returned to becoming my dad’s daily driver to work is just a mere 5 km and back. I would use it occasionally because I found it to be a bit tiresome to drive in traffic due to the size and heavy clutch. Hence, I picked my Zen over it in most cases.

Along with that, the car had started to age. The silver colour had started to fade and no longer looked fresh, rust began to develop in several areas (some dangerously affected), and the controls became heavy. This raised the question:

To Keep or Not to Keep?

With regard to the Corolla, my folks have never been sure about selling it off. It’s always been a scenario of sitting on the fence which ends with dad cancelling the plan. However, this time around, I too felt it was time for a new car, something automatic and something a little less cumbersome to drive.

So one Sunday, I went and took test drives in the following cars. While each one of these cars had its strengths and weaknesses. I was not very impressed. If I had to pick one, I’d pick the City considering I find it to be the best value for money package. However, none of these cars (not even the Germans) felt built to last and solid as I expected them to be. Driving experience wise I found the Virtus 1.5 to be the best of the lot, yet I feel it does not live up to the price it demands. So that did it.

Mark my words, no car from today will offer the durability and reliability that generations of Toyotas and sedans, in general, would offer. Not even the Toyotas of today can probably be as good.

Furthermore, the resale value for the older Corollas is quite low now, so we would get peanuts for it if we were to sell it off.

To add to that, we spent a good sum in 2018 to overhaul the suspension and brakes and in 2020 I renewed the registration as well. Also, a sub 40k km run Corolla today is probably rarer than plutonium.

So it was time to plug all the issues.