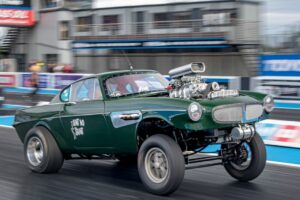 Hot Wheels has unveiled its 1:64 die-cast version of the custom 1969 Volvo P1800 Gasser built by 2021’s Hot Wheels Legends Tour winner Lee Johnstone of the United Kingdom. It will become part of the Hot Wheels Garage of Legends line of diecast toys – where the victor has their car honoured in diecast form.

The 71-year-old mechanic from Somerset, UK built his 1969 Volvo P1800 Gasser after buying it as a rusty shell some years back. He put in a Chevrolet 454 big block engine and added a 671 GMC supercharger and dual four-barrel carburettors.

Johnstone’s P1800 has a lifted ride height with a menacing drag racing stance on wide rubber, helping put its power to the tarmac. The car has oodles of personality, and was finished in Volvo Green with ‘ain’t no saint’ emblazoned on the sides.

Together with his wife and daughters, Johnstone took his P1800 on the Hot Wheels Legends tour in 2021 – events dedicated to celebrating custom car builds of all kinds, as well as the die-cast cars themselves, which are many car-lovers’ first experiences of the motoring world. The Volvo P1800 impressed with its undeniable charisma, managing to beat off the competition and make Johnstone the first winner of the tour from outside the US.

The P1800 Gasser looks pretty cool in miniature 1:64 scale, from the ‘ain’t no saint’ motif, to the massive blower sticking out of the bonnet. Hot Wheels says the accurate representation is possible thanks to modern CAD which allows them to scan the real car before creating a 3D model. Their team thoroughly tests the miniature model to make sure it performs as well round a Hot Wheels track as it does sitting parked up on your shelf.

While the Hot Wheels brand has stayed true to its roots making 1:64 scale toy cars for around 54 years, it’s evolved to play an important role in strengthening car culture. Many car enthusiasts will have discovered their love of cars thanks to Hot Wheels models, and having your own car immortalised in 1:64 scale is an enviable dream come true