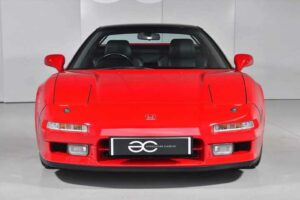 Right, I’m going to get the price bit out of the way first. No, this original NSX isn’t cheap. Yes, it’s even more expensive than the current-generation Honda NSXs that are gracing the PH listings right now. I am also aware that it’s not far off twice the price of all the other NA1 NSXs. I know all that. The great news is that it isn’t compulsory to buy it for £145,000. So if you’re not interested in this car at this money, you aren’t being compelled to purchase it.

With the price dealt with, we can move on to appreciating this car for what it is. I mean, just look at it. What a thing. What an absolute thing of beauty it is. Firstly, the colour is spot on. I do love a red NSX because – let’s get this bit out of the way early as well – red was the colour of the car that Ayrton Senna was filmed driving, which kind of sealed it for me as the colour to have. And as trite as that is, to be fair the NSX does rather suit red: it works well with the black roof and tinted rear light panel, don’t you think?

The next point on my list of ‘Why this car is a belter’ is it’s a manual. You see so many autos of these, and I just cannot bear the thought of ruining a delicate-handling car like the NSX with an automatic. These days I am happy to concede the technical prowess of snappy dual-clutch ‘boxes in supercars, but a four-speed auto: no thank you. Especially because Honda is so good at manuals, which in this case is a five-speed but the later NA2 versions added a sixth ratio to that.

Then there is the mileage to consider. At just 12,000 miles, in the hands of its sole owner, plus pretty much a complete set of MOTs and service stamps to verify that oh-so-gentle tally, it’s a prized specimen indeed. And if the paperwork isn’t enough to convince you this is among the best out there, then cast your beady eyes over the pictures. The paintwork is lush, and, according to the advert, ‘really pops now’ after a machine polish. Peak inside, too. Check out those ruched black leather seats – how inviting are they? Is it just me that has a strong urge to park my backside on them? I just want to submerge myself into that immaculate interior and play with all the buttons and knob, just like an excited kid at a motor show.

It’s not just in those obvious places that this 30-year-old car looks barely 30-minutes old. The engine: flawless. The hardware in its nose: pristine. The underbody: unsoiled. Isn’t it just fascinating to study, particularly the shot of the rear subframe with every component – wishbones, silencer and sump – glistening and fresh.

I realise that this isn’t a mid-engined Ferrari or Lamborghini; it doesn’t have that level of ethereal exotica. Still, don’t forget it was styled by Ken Okuyama, who went on to pen plenty of Ferraris, including the 456, Enzo, 612 and 599. And it was still a time consuming car to build – it took 40 hours to construct an NSX, which was nearly three-and-a-half times the hours spent on a regular production Honda, like the Civic. So it’s hardly the Honda equivalent of an MR2 that’s for sure.

Technically it set the bar high as well. There were innovations, not least its all-aluminium monocoque – the first series production car to employ such a design. The custom-built 3.0-litre quad-cam V6 engine was bristling with fancy materials, such as lightweight titanium, which was used in its internals to allow it to spin to a spine-tingling 8,300rpm limit. Naturally, that high-revving capability was made usable by the VTEC system. These days we now know VTEC well and love it dearly, but it wasn’t a first for the NSX – the CRX had it first – yet the supercar used it to great effect. It delivered great peak performance from this relatively small-capacity, naturally-aspirated motor, with a reasonable degree of linearity, too.

So there you go. Expensive it maybe, but which do you think would be a nicer drive: this or a low-mileage 348? I’m going with the NSX – although, to be honest, I’ve only driven a late one, not an early car like this. I don’t need a test drive to make up my mind, though. I would take this over a 348 any day.