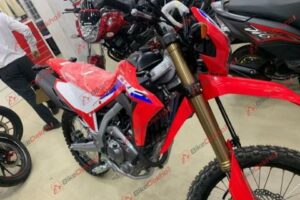 The CRF300 could compete with the Hero XPulse 200 in the Indian market.

Earlier, Honda had filed a patent for the CRF300L in India. Now, the dual-sport bike has been spotted at a dealership.

The CRF300L is an entry-level dual-sport motorcycle and could compete with the Hero XPulse 200. It comes equipped with a 43 mm long-travel USD fork suspension at the front and a long-travel mono-shock at the rear. The bike rides on 21-inch and 18-inch wire-spoke wheels at the front and rear, respectively. This gives the bike a ground clearance of 284 mm.

Powering the CRF300L is a 286cc, single-cylinder, liquid-cooled engine that puts out 27 BHP and 26.6 Nm and comes paired with a 6-speed gearbox via a slip and assist clutch.

Honda has an event scheduled for August 8, but hasn’t confirmed the model that will be announced.