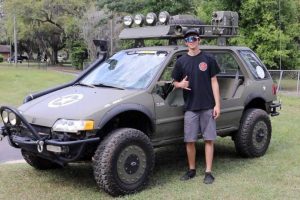 It’s entirely possible you’ve seen this wild Honda Civic before. It’s not a new build, but this new video from BoostedBoiz on YouTube does give us a new look at the unlikely off-roader in action. It certainly goes against the norm for aftermarket Honda projects that usually see cars slammed to the ground. Suffice it to say, this is one Civic that fears no speed bump. Or ocean for that matter. More on that in a bit.

First, here’s what you need to know about this bonkers build. It’s the brainchild of Ben Huffman, who credits this car for launching his company called HRG Engineering. In short, he picked up this clapped-out 1991 Civic wagon for $500 back in 2015, literally saving it from going to the junkyard. Instead of going low, Huffman went high and began experimenting with different suspension setups to make the small Civic an off-road hero. It boasts a six-inch lift, rides on 30-inch tires and wheels with custom-made covers, and it’s all driven by a stock 1.6-liter SOHC four-pot under the hood.

And lest you forget – this era Civic was available with all-wheel-drive, so it turns all four wheels. The RT4WD actually used a six-speed manual with an ultra-low first gear, so despite limited power under the hood, the plucky wagon is quite capable off the beaten path. The video demonstrates as much, taking us on a short trip through some Florida mudholes and eventually into the ocean near Bradenton. The car stays close to the shore, but it has no problem navigating waters up to the hood. A liquid-friendly interior with drain holes and a snorkel for the engine certainly helps.

As for the occupants, the custom-made half-doors offer little protection from flying mud, and by little we mean no protection. But hey, that’s part of the experience and if you’re a regular Motor1.com reader, you know we love crazy off-road builds like this. Our only question now is, can we see a lifted Acura Integra Type R? Don’t lie – you know you want to see it, too.