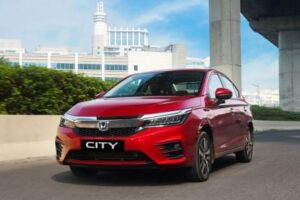 Honda has sold over 9 lakh units of the City in India till date.

Honda is celebrating 25 years since the City was launched in the Indian market. The popular mid-size sedan went on sale in 1998.

To date, Honda has sold over 9 lakh units of the City in India. The car is sold in 80 countries across the world and has generated cumulative sales of 4.5 million units globally. India accounted for over 28% of its sales in the Asia / Oceania region during the period of January-August 2022.

Currently, in its fifth generation, the Honda City is offered with two engine options. The 1.5-litre petrol engine makes 119 BHP and 145 Nm, while the 1.5-litre diesel puts out 99 BHP and 200 Nm.

Earlier this year, Honda introduced the City Hybrid in India. It uses a 1.5-litre, 4-cylinder petrol engine paired with two electric motors, offering a combined output of 124 BHP and 253 Nm.