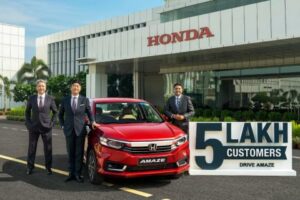 In the current fiscal, petrol variants accounted for 93% of the total sales.

Honda has announced that it has sold over 5 lakh units of the Amaze since it was first introduced in 2013.

According to Honda, the Amaze is their best-selling model, accounting for more than 40% of the brand’s cumulative sales. The car is sold in both domestic and export markets.

Tier 1 markets account for 40% of the Amaze sales, while Tier 2 and Tier 3 cities account for the remaining 60%. According to the company, 40% of Amaze customers are first-time buyers.

In the current fiscal, petrol variants accounted for 93% of the total sales and the share of automatic variants was 30%.