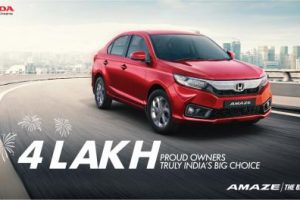 Honda has sold more than 4 lakh units of the Amaze sedan in India since the car’s launch in 2013. 42% of Amaze customers are said to be first-time car buyers.

The first generation Amaze was launched in April 2013. Honda claims to have sold 2.6 lakh units of the car. The second generation was launched in May 2018 and has sold 1.4 lakh units. Honda claims that Tier 1 cities account for 44% of the total Amaze sales, while Tier 2 and 3 cities account for 56%. 9% of the first-gen cars sold were equipped with an automatic transmission, while that figure increased to 20% for the second-gen Amaze.