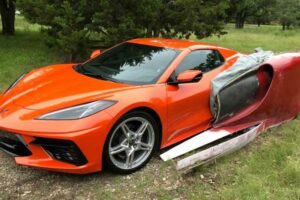 True car modifiers will tell you their work is an art form. Since the first one rolled onto the road, people have had an incessant need to personalize their rides. Think about Art Deco in the ’30s, hot rods in the ’50s, muscle in the ’70s, and tuners in the ’90s, along with so many more trends throughout the years.

New performance cars are rarely cheap, though, so watching someone mod their own—and I mean truly mod it, with more than bolt-on parts and an off-the-shelf tune—has almost become a rarity. That’s why it’s important to point out when we see a brand new car like this C8 Chevrolet Corvette being significantly (and unusually) modified in its owner’s driveway. 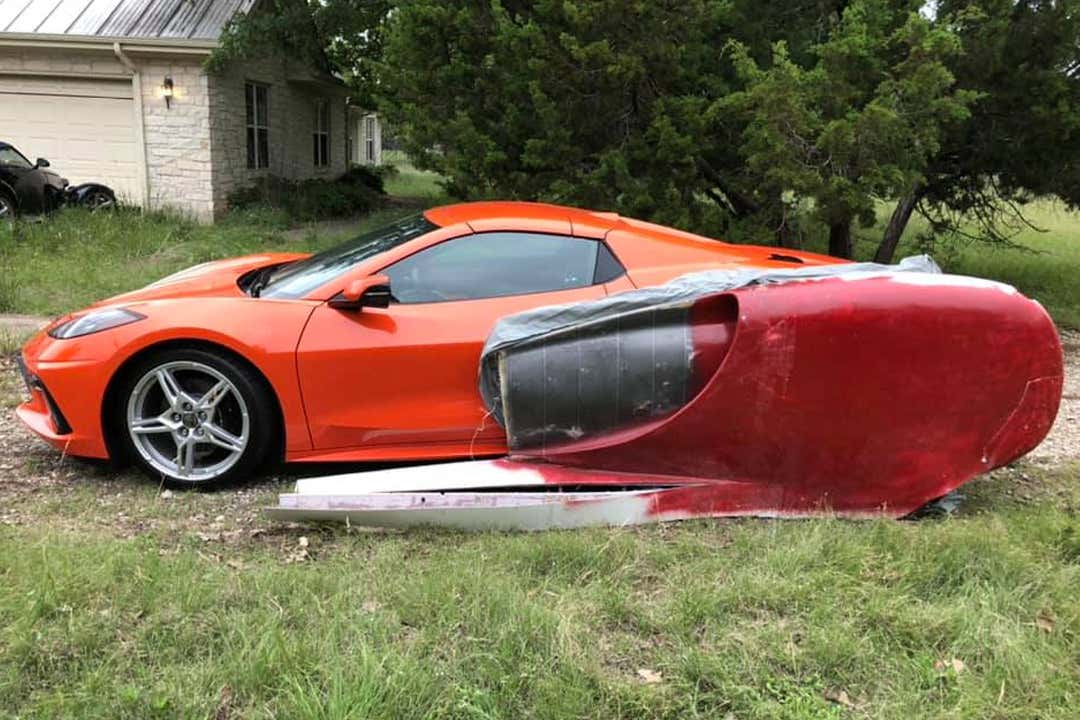 To say that Jack Wendel’s vision is controversial would be an understatement. His C8 has been floating around Facebook since he took delivery of it roughly one month ago, and the bodywork—which was started before he bought the car—has been circulating for even longer. Some groups have received his intentions well, though others, not so much.

In fact, one single comment pretty much sums up exactly how split the internet is on this project:

“The problem is, people see it as a Corvette and I’m destroying something that they consider beautiful. So from that perspective, you know, I kind of understand it,” Wendel explained to The Drive. “But they’re not seeing the other perspective: I’m building something and I needed a good platform to start with. What better platform is there than the C8 to start with?”

It’s clear that Wendel’s a fan of coachbuilt cars, especially retrofuture and all things Art Deco. Heck, he even purchased two coachbuilding companies—Deco Rides and Delahaye USA—just recently, as he plans to commercialize the kit for the C8. At one point, he owned a C5 Corvette that was built as a custom commemorative edition with a body styled after the original C1, and he also happens to own a Plymouth Prowler. Perhaps that’ll give you an idea of his taste in cars.

As for the C8, it will serve as the mid-engine donor for his driveway-designed supercar.

Still, it’s kind of hard to envision what Wendel’s madness looks like in physical form, and that’s why The Drive reached out to him to learn just what he had in mind. He told us it’ll be a blend of Art Deco and performance. He sent us a photo of a scale clay model to show what he anticipates the final product will look like, noting how different it looks than a C8—and that’s the point. 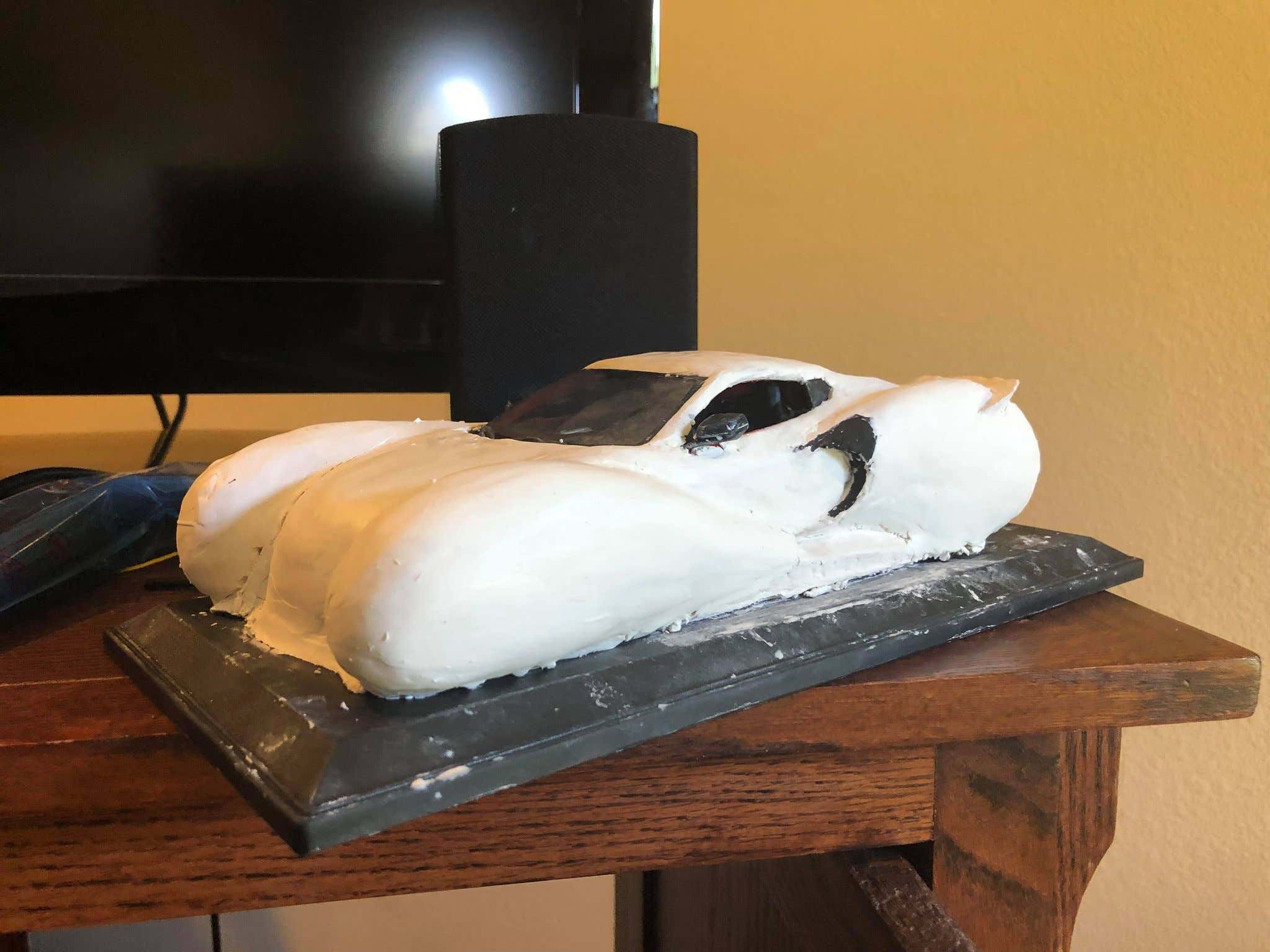 Wendel says he selected the C8 simply because it met his requirements of being mid-engined, having easily attainable off-the-shelf parts, and new car engineering. The car is simply a tool for him to build something unique, inspired by work by Chip Foose and Rick Dore.

It’s evident that Art Deco played a big role in his design language, and yet he mentions that retro isn’t his goal. Instead, he plans to incorporate these into a more modern package styled along the lines of the DeTomaso P72.

The project itself is still in its early stages, but it’s incredibly interesting to watch someone pick up a $70,000 sports car and make it their own using determination and a whole lot of elbow grease. But interesting doesn’t always mean that people will agree with what he’s doing to the C8.

Still, he pushes on and shares the work on social media. On his YouTube channel, aptly called ShadeTree Supercar, Wendel can be seen applying layers of fiberglass to shape the parts to smooth out the C8’s bodylines, and he discusses the challenges of building the new body along the way. He also regularly provides updates on Facebook, showing mockups of the bodywork and recent progress.

Once Wendel finishes a rough concept, he plans to have the fiberglass parts smoothed out and made into molds so he can sell kits for other C8 owners who want an Art Deco-themed performance car of their own.

Now, Art Deco rides can be hit or miss. The C8 seems to be a particularly difficult one to nail down due to its sharp, modern lines. That’s where those coachbuilding companies he acquired should come in handy; both feature tooling and personnel that specialize in delivering custom-bodied tributes of classic speedsters, similar to what Wendel looks for in his C8. Needless to say, we’re hoping for the best.

But above all the opinions—positive or negative—Wendel’s C8 project shows that someone out there isn’t afraid to take their new car and make it what they really want. With the price of new cars, especially those on the level of a C8 Corvette, it’s rare to see this happen. Might as well sit back and enjoy it.