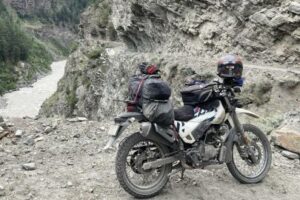 I rode my fellow riders’ Dominar 400 & Himalayan for quite some time during the trip to Spiti & Xpulse was a clear choice for my liking.

BHPian camitesh recently shared this with other enthusiasts.

Little background on the purchase and requirement

I’ve been riding to the mountains since 2012, but not on the most appropriate bikes meant for the job. Last I did Mumbai-Leh-Mumbai in 2021 on my CBR250R and I struggled a fair bit on tricky off-road sections / water crossings. This year, we had plans to do more off-roading with Spiti and Sach Pass on the cards.

I started looking for a small bike with better off-road credentials, which could come in handy for the annual trips to the mountains. I am not an RE fan so the choice was simply between KTM 390 Adventure and Xpulse 200 4V. I was very close to getting a 390 Adventure but the 1.5-2 months of minimum wait period in May 2022 was a deal breaker.

I test rode Xpulse 200 4V with very little expectation considering it was less than half the OTR price of my other alternative. A smooth test drive experience and ready stock availability sealed the deal further. The booking and delivery details can be seen in this post.

My experience with this bike has been largely very good so far. So most of the things that I’m going to write down below are positives attributed to this machine. But the negatives do exist and they are very well summarized in this thread by a fellow BHPian.

Short review of the bike on highways and off-roads

A lot has been said here and elsewhere on Xpulse’s off-roading prowess and based on my hands-on experience with this machine in Spiti and Sach pass, I agree with most of the views shared. I’ve never been so comfortable or confident off-road on any other bike as much as I am on my Xpulse. I rode my fellow riders’ Dominar 400 and Himalayan for quite some time during this trip to Spiti and Xpulse was a clear choice for my liking though Himalayan wasn’t too far behind as well.

The ride experience is extremely good even with stock set-up and I had sort of made up my mind to upgrade to rally suspension soon. However, many comments from fellow members on RiderZone’s thread do suggest that the stock suspension is indeed a much better choice for average folks so I may eventually give the rally suspension upgrade a miss.

There’s ample torque for most tricky terrains, the gearing is decent and the riding position with the handle-bar mod is amazing, so I have very little to complain about here. The stock combination was more than sufficient to breeze through most of the tricky terrain in the mountains. The stock tyres are pretty good as well on most off-road surfaces.

Most of my other riding buddies too tried the Xpulse off-road and the overall feedback for this bike off-road has been very good.

I rode the Xpulse from Mumbai to Himachal Pradesh and back so ended up spending most of the miles on the highway. I did not have any big expectations from this little motor for highway duties, to begin with. My fellow riders were on Versys 650 and Dominar 400 so I was a bit doubtful about keeping up with them on highways. I expected sub-100kmph speeds when the bike was fully loaded. However, pleased to say I could maintain good highway speeds and decently keep up with others.

Vibrations are felt aplenty, especially on the handlebars but manageable with some aftermarket grips and good riding gloves. I feel 80-90 kmph is the sweet spot for a smooth cruise. We had almost planned to ship our bikes back during the return journey and take a flight back. Axe77 helped me with some details on shipping the bike back to Mumbai. But when the decision-making time came, I was just happy to ride it back home than to ship it back.

Braking is average at best, especially on highways. I could feel the ABS unit working really hard on a couple of occasions when I was caught off guard by stray cattle on highways. I absolutely love the Nissin brake setup on my CBR250 so I expected something similar (especially considering the brake pad prices for Xpulse). However, the brakes are strictly okayish on highways. For off-road though, I had no issues at all and they seemed absolutely okay. Even the rear brakes seemed to be very well calibrated as I hardly remember ever locking them up unintentionally.

With the triple-digit highway runs, I could barely get 250 km in one tank before I had the reserve indicator on and I would end up refueling below 300 kms from tank to tank. By my rough calculations, the max highway mileage I could achieve was 30-32 kmpl with spirited riding. No complaints as this was as expected. However, in the mountains, I could extract 40+ kmpl most of the time. Haven’t had much chance to test the mileage in the city but I could say it’s easily between 35-40 kmpl.

Some other good bits

Accessories and preparation for a long trip

A brief note / review on the accessories that I got installed for those who are interested.

To summarize, I bought Xpulse as a stop-gap arrangement since I have some plans to upgrade to a large tourer soon. While buying the Xpulse, one thought was that I might sell off the Xpulse once I upgrade to a bigger bike. However, it is a very difficult decision to let it go now considering it’s the weapon of choice even for my city commutes (preferred over other two-wheelers in my garage). Hero has done a good job with this one IMHO and I can’t wait to see what they do with the larger Xpulse that’s on the cards.

This post is not a travelogue of my ride to Sach pass and Spiti. Nevertheless, sharing some pictures from this one hell of a ride on this amazingly capable machine.