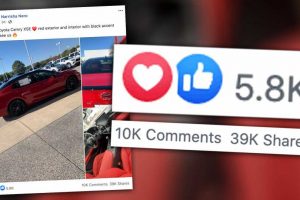 The Toyota Camry and Facebook seem to share a special relationship. There are entire groups dedicated to sharing pictures of “Camrys in Predicaments” and, of course, the famous Camry Dent. Today, however, we’re going to attempt to explain yet another Camry-related Facebook phenomenon: how and why a seemingly rote and innocuous Camry post by one Memphis Toyota dealership employee went viral.

Posted earlier this week by Chuck Hutton Toyota customer service rep Narrisha Nero is a simple Facebook photo gallery made to lure buyers for a new and very red Toyota Camry XSE. “New Toyota Camry XSE red exterior and interior with black accent come see us,” it reads. It also contains three not-that-great photos of the car in question. Not the most exciting thing on the internet, to say the least. 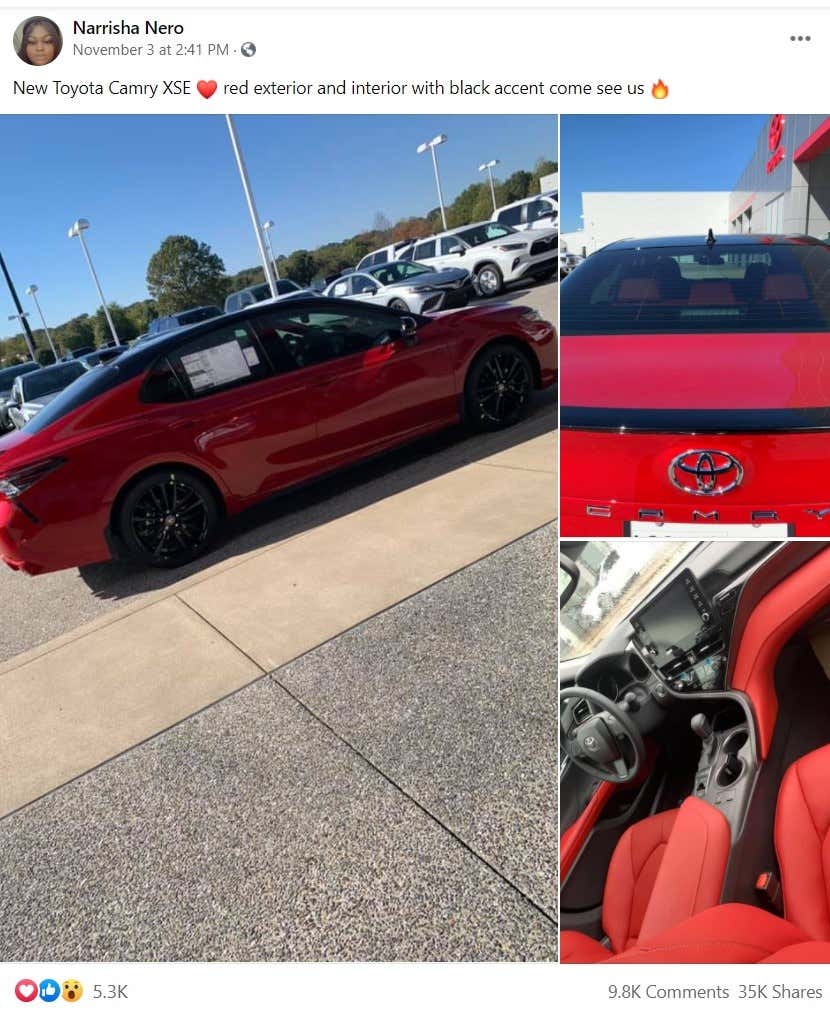 However, as of this writing, it’s sitting at a whopping 5,300 reactions, almost 10,000 comments and 35,000 shares—numbers any media outlet, most definitely including The Drive, would be thrilled to achieve. Something like this would never find success in the cutthroat world of Facebook car enthusiast groups where we typically hang out, but its sheer virality pushed it onto our feed anyway. We wondered, like those of you who might’ve seen it, why? How did this mundane post about a mostly mundane car attract so much attention?

To shed some light, we turned to The Drive‘s Social Media Director David Lee. His response was succinct: “Because she’s a boss, and red interiors index higher.” In other words, the post’s virality can be traced to the fact that Nero has over 5,000 friends on Facebook, combined with the way algorithms and our eyeballs perceive red car interiors, combined with the fact that the Toyota Camry is still an exceedingly popular vehicle with a large swath of Americans.

Lee also pointed out that she had multiple friends with their own follower counts in the 5,000 range. “You just need a few of those 5k-ers to share your post to go viral,” he said.

As much as we enthusiasts like to talk smack about the Camry, it’s clearly a very popular product among those who just want a nice, reliable way of getting from A to B—a.k.a. 99 percent of the buying public. The snazzy red leather, two-tone paint, and admittedly aggressive styling are cherries on the cake. It’s no TRD, but it’s certainly a far more exciting and competent Camry than could be had just five years ago.

Moral of the story? If you have ambitions of becoming a bonafide automotive social media influencer, forget the six-figure supercars and questionable LS swaps and get yourself a factory-fresh Camry. Just make sure its interior is red and you already have thousands of friends.