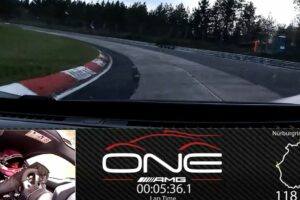 The Mercedes-AMG One, AMG’s ultimate road-going race car, has just set the record for fastest lap around the Nurburgring in a production car, clocking a blisteringly quick time of just six minutes and 35.183 seconds. What makes it even more impressive is that the track was apparently damp and conditions were less than “ideal” – could the One be capable of even quicker times if it were given a perfect, dry track?

Just last year, a Porsche 911 GT2 RS with the Manthey Racing pack lapped the ‘Ring in six minutes 43.3 seconds. That means the One has just beaten the Porsche’s time by a whole seven seconds. In the damp.

This onboard video shows just how brave the Mercedes-AMG One driver, Maro Engel, is. The One just slices through each one of the ‘Ring’s over-170 corners with ease, and the confidence with which Engel does it is testament to the supercar’s composure. We really do recommend watching the whole thing through.

The One was put into Race Plus mode for its Nurburgring outing, which employs the car’s Active Aero, tightens up the chassis, lowers the ride height by 37mm, and unleashes all of the car’s power available.

The Mercedes-AMG One is powered by an F1-derived 1.6-litre turbocharged V6 engine and four electric motors for a total output of 1,049bhp. According to Mercedes, Engel had to “lift and coast” at certain parts of the track to build braking energy for the faster sections. Engel really opens it up in the faster sections, reaching speeds of 210mph on the ‘Ring’s main straight, the Dottinger Hohe.