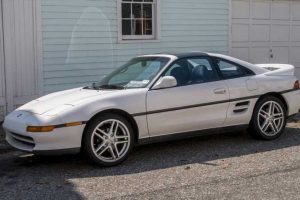 The first-generation Toyota Mister Two may get all the attention at auctions right now, as restored examples jockey for increasingly improbable amounts of cash, but the second-generation MR2 was in production for about twice as long. And it remains something of an engineering miracle. It arrived during a time when the selection of little Japanese sports cars was much more varied than it is today, not yet ruled with an iron fist by the Mazda MX-5 Miata.

Remember this generation of the Toyota MR2?

Offered in naturally-aspirated and turbocharged flavors, the second-gen MR2 debuted during a recession. It had to fill the shoes of the impossibly angular first-gen model that had only been in production for five years. The new MR2 may have kept the mid-engine layout, but it was very different on the outside, trading right angles for very sleek bodywork. The second-gen model also gained some weight in order to deliver a sturdier chassis and more cabin comfort. It also benefitting from a larger engine.

“Fly down a windswept path soaring with the impassioned MR2. Its aerodynamically carved body streaks along with a mere 0.31 drag coefficient,” ad copy of the time promised. “The front air dam direct the airflow past the aerodynamic underbody pan which helps to prevent lift and improve performance. The retractable halogen headlamps, dual black outside mirrors and flush side marker lamps help manage airflow smoothly over the vehicle and past its dual chrome-tipped exhaust pipes.” 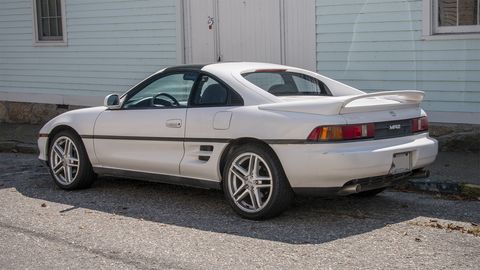 While the MR2 Turbo paired a 2.0-liter engine with a turbocharger, the naturally-aspirated model seen here was powered by a 2.2-liter unit good for 130 hp. Transmission choices were either a choice of a five-speed manual or a four-speed auto. The manual is arguably what you wanted and why you were buying this car in the first place, and that’s what’s in this particular example.

Still, the tradeoff of buying the non-turbo model was not small by any measure: 70 fewer horses. The MR2 Turbo served up 200 hp and 200 lb-ft of torque, making it a rabid little mid-engine coupe.

“Work your way smoothly through the 5-speed manual overdrive transmission. Feel how responsive the quick-ratio rack-and-pinion steering delivers your commands to the road,” ad copy of the time said. “The 2.2-liter, twin-cam, 16-valve, EFI engine feeds a feast of power to the MR2. With 130 hp and 140 lb-ft of torque, this dynamic produces more than just power… it generates excitement.”