Here's A Good Look At The New Batmobile In Broad Daylight 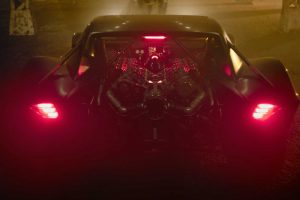 By now, you should have heard that a new Batman movie is coming. It’s now on its 11th version since Michael Keaton brought the caped crusader to the silver screen in 1989.

While Robert Pattinson somehow adds to the DC movie’s popularity – plus the fact that the new Batman was formerly a sparkling vampire – what we car nuts want to really see is the new Batmobile.

We’ve had a good look at the new Batmobile through previous movie trailers and Director Matt Reeves’ tweet. Now, it’s time to see the Batmobile in broad daylight, as spied allegedly during a set (see video atop this page).

While the previous teaser images show us a good look of the Batmobile’s vented hood and muscle car-like stance, these spy shots show us more of the rear end, which houses a rather exposed engine bay. The rear end also shows the taillight cluster (with a third brake light, curiously), two vertical exhaust exit on each side, and a massive afterburner right in the middle.

There were two Batmobile prototypes seen in the video, with the other one looking like a stand-in for some scenes that don’t show the rear since it doesn’t have an engine. In profile, Battinson‘s Batmobile looks sleek – but, of course, you already know that.

We have to wait longer before we could get a better moving view of the new Batmobile on the big screen. The new movie, which is entitled The Batman, is slated to reach theaters in October 2021. Robert Pattinson will face a handful of villains in the movie, with Zoë Kravitz as Catwoman, Paul Dano as the Riddler, and Colin Farrell as the Penguin.