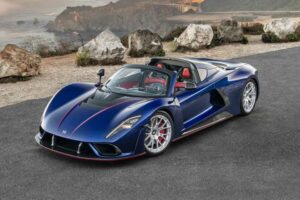 This time last year, Hennessey confirmed that every single Venom F5 had a customer allocated to it. Exciting news for all involved, be that selling a $2m car or placing an order for a 300mph one. How to follow that at this year’s Monterey Car Week? The Hennessey Venom F5 Roadster, of course.

Like the Coupe, the F5 Roadster will be powered by the incredible 6.6-litre twin-turbocharged V8, all 1,842hp, 1,193lb ft and 8,000rpm of it. This isn’t even much heavier, either, thanks to a new removable carbon roof panel that weighs just 8kg, meaning Hennessey can still claim a dry weight of 1,405kg. So this remains a 300mph car, in theory, though a top speed with the roof down hasn’t yet been issued.

Hennessey will be hoping to surpass the 265.6mph set by a Venom GT Spyder in 2016, especially with a Roadster always said to be part of the F5 plan: ‘Hennessey’s Venom F5 Coupe was engineered from the outset with an open-top version in mind, so only minor adjustments were required to deliver coupe-rivalling chassis rigidity, strength, and stiffness – this ensures that drivers may access the same crisp handling characteristics as the Venom F5 Coupe with or without the roof in place’, notes the press release. That’s the benefit of a carbon monocoque for you.

Those who do venture out roofless in an F5 Roadster will have the choice to store their panel in a Merino wool travel bag or ‘as a standalone work-of-art on a custom-made, sculptural pedestal’. Also made from carbon and designed by Hennessey, the pedestal is said to be inspired by different shapes of the car depending on which angle it’s viewed from. Cars & Coffee won’t know what to make of that.

There will be plenty for eager onlookers to gawp at, actually, as the Roadster isn’t just an F5 with an Alcantara-lined carbon targa panel. Note the new tempered glass window to get a proper peek at the ‘Fury’ V8, apparently developed for use in jets and therefore able to withstand temperatures in excess of 540 degrees. And deal with 300mph, of course. There’s also a new look for the rear deck, with the hardtop’s conventional cooling vents replaced with milled extraction holes that mimic the look of the bumper and some new aluminium slats. Just in case the F5 wasn’t attention-grabbing enough. Don’t miss the new forged and milled wheels, either, with each of their seven pairs of spokes designed to look like a long Hennessey ‘H’.

There will be 30 F5 Roadsters coming out of Texas over the next few years, compared to 24 coupes. Each buyer will be able to spec every last detail of their car, down to how much of the carbon body is left exposed. Still, they’re going to be asked $3m for the privilege, so limitless personalisation seems like a given. Hennessey says Roadster production will begin later this year, with the last bit of high-speed validation to be sorted out in the coming months. John Hennessey is in no doubt about what his company has created: “The Roadster version takes the Coupe’s speed, exhilaration, and awe, plus a sprinkling of respect-inducing fear, to a new, truly visceral level that brings owners closer to the Venom F5’s extreme performance.” Makes you wonder what might be coming to Monterey in 2023…