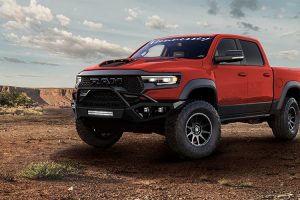 If you thought Ram’s Hellcat-powered 1500 TRX wasn’t quite enough, don’t worry: Hennessey has something. The Texas-based tuner has reportedly taken the 702 hp pickup and cranked up the power, added bigger rubber, and tacked on some extra features. Dubbed the Hennessey Mammoth 1000, this modified Ram breaks into the four-figure horsepower world with 1,012 hp.

Hennessey upgrades go beyond the engine bay and might make owning the truck a little easier. The Mammoth 1000 is equipped with a retractable, electronic bed cover, new front and rear bumpers, and a new set of 10-spoke wheels that are wrapped in 35-inch tires. The modifications make it look even more aggressive than the standard TRX, but that only helps push the Mammoth 1000’s over-the-top image.

Hennessey is capping production of these hopped-up pickups to 200 examples. As you would expect, these upgrades only add to the price of the already pricy Ram TRX. If you want to add one of these reworked Ram’s to your fleet, it will set you back at least $135,350. For those keeping score at home, that’s about $60,000 on top of the price of a Ram TRX. And if you’re the type who feels compelled to brag about numbers: This might be the truck for you.