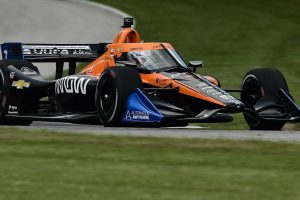 Three-time Indianapolis 500 winner Helio Castroneves will drive the No. 7 for Arrow McLaren SP next weekend in the IndyCar Harvest Grand Prix doubleheader at the Indianapolis Motor Speedway Road Course.

The decision comes after regular driver Oliver Askew was deemed unfit to race by the IndyCar medical team. Askew reported issues with balance and coordination and will be subject to IndyCar’s return to racing protocol before he can be cleared to resume racing activities.

Askew had felt these symptoms since his incident in the Indianapolis 500 last month.

“This was an incredibly tough call, but I have to follow the advice of the IndyCar medical team and my doctors,” said the reigning Indy Lights champion. “My priority right now is focusing on my health.

“Despite not being in the car, I will be at the Indianapolis Motor Speedway for the Harvest GP, giving whatever insight and support to Arrow McLaren SP that I can.”

Castroneves has only raced for Team Penske since the 1999 CART season, but is seeking both a return to full-time IndyCar competition and a new team with the impending closure of the Penske IMSA operation.

“First and foremost, we wish Oliver the best and that he is able to take time to recover,” Castroneves said. “I look forward to getting back on track and helping to build on the great progress that Arrow McLaren SP has made this year.”

The 45-year-old Castroneves has made six starts at the IMS road course with two podiums.

Askew has one podium in 11 starts with a third-place finish in the fifth race of the season at Iowa Speedway. His teammate, Pato O’Ward, is third in the standings.